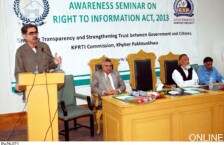 MANSEHRA: The Khyber Pakhtunkhwa Right to Information Commission has held sessions in Kohistan region to create the people’s awareness of their rights and fight honour killings, said assistant registrar at the commission’s Hazara division chapter Hammad Ahmad Jan on Thursday.

Mr Jan told reporters here that the commission had engaged the Comsats University’s women students as volunteers for the Claim Your Rights initiative, who educated Kohistan residents about their rights, including those to information and services.

He said the initiative was meant for the people of Upper and Lower Kohistan and Kolai-Palas districts as they didn’t file a single application with the commission about a lack of services or corruption in government departments since the enforcement of the Right to Information Act in the province in 2013.

The official said women volunteers engaged in collaboration with nongovernmental organisations were trained at and deputed to the Musharraf Hospital in Abbottabad to sensitise patients, attendants and visitors almost all from Kohistan districts.

He said the ‘philanthropy hospital’ served the people of Kohistan region only and the RTI Commission’s volunteers had been working there since the launch of the project two months ago.

Mr Jan said people both women and men were killed in the name of honour, so the project was helping create awareness among the residents, especially women, of their rights and how to fight the practice of honour killing.

Meanwhile, psychologists on Thursday held sessions for Balakot police officials about ways and means to address physical and psychological issues.

The sessions were organised on the orders of the DIG Hazara division under the ‘Sound Mind and Sound Body’ initiative and attended by police officers and constables.