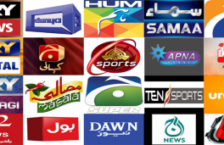 Early in the millennium, the private television channels in Pakistan brought a new trend of news bulletins and current affairs talk shows. This no-holds-barred freedom in the post 9/11 environment heralded in its stride undesirable trends alongside positive ones.

In response to viewers’ appetite for independent news and bold analyses, the channels aired round the clock bulletins with blitz of “breaking news” mostly about terrorist incidents. These news alerts were instantly picked up by all TV channels without verifying the veracity. Smashing the monopoly of state-run television, an assertive private TV media, without following an agreed code in the presence of a toothless regulator started grabbing viewership by non-stop sensational news about crimes, as well as political and financial scandals happening perpetually. The trend continues to this day.

Our private TV channels replicated largely the Indian model in terms of choice of content and high pitch style of presentation. Indian channels had developed the format of news presentation by combining features of American news channels with high drama of Bollywood and TV soaps. In emulation of their Indian counterparts, our channels started employing the contents and language of tabloids. The cut-throat race for ratings prompted news channels to resort to all-is-fair “shock and awe” techniques to keep the viewers engaged.

The worrying aspect was not as much the style but the content that has predominantly been negative. This almost universal trend while not a problem in developed countries badly hit the morale of our people. There is no harm in brining spotlight on social ills and bad governance, but side by side the inspiring news stories should also have been aired in order to present the complete picture of society. The prime time became “crime time” with reality shows of crime re-enactment and busting of places. The political talk shows became arenas of exchange of hot (sometimes abusive) words turning into scuffles and walk-outs by guests. Even the infotainment shows, abandoning pure situational decent humour, started creating comedy from political satire and parody in addition to witty and sometimes bad-taste retorts from persons mostly recruited from Punjabi stage theatre.

The viewers lost the sense of ‘shock’ as the negative news items became routine phenomena. This was a dangerous development as tragic developments without relief and neutral news reports led the nation to a degree of insensitivity where otherwise alarming incidents failed to provoke viewers into taking remedial measures. If objective of bad news is to make more profits, then even this would fail as the news value of shock has diminished. A key objective of unpleasant news items is to incite the viewers into finding solutions, but in doing so there is also need to walk clear of benumbing or demoralising the agents of change, the people themselves.

Our people are now yearning for relief in the shape of enthusing or at least neutral news. A recent Gallup Pakistan Poll found that only 36% viewers were satisfied with performance of television channels. The nation needs confidence by coming out of a defeatist mind-set. The identification of problems and their solutions will not deliver unless the confidence and self-esteem of our nation is restored so that people can take on the challenges. The media has a responsibility to bring the people out of despondency and re-energise them for seeking solutions. It is also its obligation to promote a better image of the country by highlighting positives and strengths of our countrymen and women living within country and abroad.

The TV channels do not need to present a hypocritically rosy picture, but it is also hard to imagine that nothing good is happening in or about the country. This may undermine media’s credibility as a mirror is expected to reflect both ugly and beautiful.

After three political changes in 2008, 2013 and 2018, the people are less interested in watching political squabbles and anchors’ biased views. The viewers are craving for practical solutions of socio-economic problems. Last year a Gallup Survey found that, only 28 percent viewers watched talk shows.

The entertainment which is mostly derived from political satire shows has become predictable and is often in bad taste. Their viewership has also begun to plummet as only 20 percent viewers expressed their satisfaction with the quality of such shows in the Gallup Poll. There is a surfeit among viewers for watching entertainment through political prism. Though, a redeeming aspect is the gainful employment of stage and stand-up comedians in these shows.

The realities of today’s Pakistan are different from those in the first decade of the millennium. The templates of news presentation and contents and formats of current affairs talk shows and infotainment shows need resetting. Most of the channels appear to be averse to introducing change of content or format. The channels have yet to telecast programs for various age, gender, social and professional segments. The younger social-media addicted generations, around 60 percent of population, are interested in watching TV programs relevant to them including those on education, job opportunities, role in social welfare and entrepreneurship. In the times of new hope and transition, majority of viewers wish to be inspired, enthused, enlightened, motivated and mobilised in addition to being merely informed and thrilled. In the past one and a half decade the media highlighted problems and identified solutions. Now is the time to show how these issues are being resolved or could be resolved at community, civil society, private sector and government level.

In the entertainment realm, soaps on social issues may be aired instead of family formula dramas on love affairs, marriage and divorce. See how much popularity TV drama serials like Udaari, Meri Guriya and Baaghi gained! Dramas are not the only entertainment as our TV channels would make us believe. There are thousands of other subjects that could be presented to entertain and educate. Two or three sports channels telecast mostly stale stuff without interest element. The entertaining things about sports are rather presented on news channels. The morning or day time women oriented shows are not yet ready to introduce segments other than on beauty, health and culinary tips or on predicting future through astrology. Hence the ultimate entertaining cherry-on-the-cake is alluring game shows or occasional TV & film award events.

So far apart from sporadic steps taken by a few channels, a wide scale and deliberate effort is not being witnessed to make content and format relevant to contemporary realities in Pakistan. These shifts in the domains of information and infotainment would indeed be commercially profitable. In the face of hard competition from social media, the TV channels will also have to keep in view the speed factor, on-the-spot element and threshold of younger viewers. A thorough retuning of electronic media in our country is a crying need of the times.