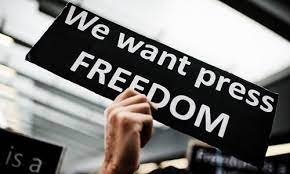 Journalists Beyond Borders (BRF) in its yearly report ((2021) has decried and disparaged the government for its consistent drive of tightening the screws around Pakistani media with no sign of expiration to review the policy that is indeed tyrannical and unacceptable for being at variance with the constitutional imperatives.

The report ranked Pakistan at 145 in the World Press Freedom Index indicating slid than the previous year confirming the government has been on the path of gagging media in uniformity though slowly but surely. The report is indeed a damning indictment of the government’s policy to deny the fundamental rights to the citizens of Pakistan– freedom of speech and expression. The report quoted an increasing number of gruesome practices of harassment and intimidation of journalists including their murder during the year. The report speaks volumes of authorities’ cruel practices like brazen censorship, disruption in the distributions of newspapers, jamming of TV channels, punitive distribution of government advertisements, and even private, forcing the media houses to mend their ways or else face the financial ruin to die. Yet, official assertion of free media may exemplify in its naked form as barefaced-lie.

Pakistan deserves better image at the international stage but is unfortunately known for the wrong reasons, more so during the incumbent government’s incongruous policies those are alien in a democracy.

The Parliament instead of being the forum of debate, scrutiny and legislation has been reduced to the status of wrestling pit, the discriminatory nature of the accountability process mired in witch-hunting of the Opposition is indeed questionable, meltdown of the economy pushing 7.5 million people below the poverty line is awful, abysmal governance rooted in incompetence impeding the delivery of services is annoying, violations of human rights by the state institutions, caring less of the image of the country as collateral, is worrying, upping of corruption as per the International Transparency latest report is regretful, increased incidents of persecution of religious minorities are heart-wrenching , the agony of grey list of FATF looming larger that the government considers its success is ironic. Sadly, Pakistan is discussed today as one of the countries among Afghanistan, Somalia, Sudan, Yemen, Iraq, Nigeria; those are at the bottom of the socio-economic indicators, and freedom of expression is rare.

The countries where freedom of expression and speech is the hallmark are also the countries those are almost corruption free– Denmark, Norway, Sweden– because the free media aggressively promotes the cause of transparency and accountability that strikes at the heart of the culture of impunity — the root cause of the vicious cycle of maladies.

Here, we only intend to discuss the freedom of press that is guaranteed in the constitution of Pakistan as the fundamental right of the citizens enshrined in Article 19 of the constitution. The delinquency of the government in this regard may not be starker notwithstanding it has been repeatedly highlighted by the local media and by the credible international organisations like Amnesty International, Human Rights organizations, International Federation of Journalists and quite recently by the ‘Journalists Across Boarders. How unfortunate that the government instead of being seen in the quest of improving the image of the country rejects such findings as part of an international agenda to malign the country.

The self-righteousness, inundated in conspiracy theories, is a dangerous tendency because it is bound to end up in obscurity syndrome pushing the country further into the abyss.

The use of third degree tactics against the media persons, perpetrated by the state actors to silence the voice of dissent, is condemnable. But the official spokespersons repeated denials indeed cast aspersions on their sense of proportion and fairness that seemingly has bilked to the depths of falsehood. The government’s denials of restrictions on media do not carry the weight at all because these are so well-known and documented in the findings of the national and international organisations after attaining the status of finality.

So much so, the European Union in its recent resolution has specially mentioned the shrinking space of media in Pakistan that may be both damming and indeed consequential.

The resolution overwhelmingly passed by the European Parliament has threatened to review the GPS+ facility granted to Pakistan carrying preferential treatment for Pakistan’s exports in the EU markets. The facility has been accruing significant competitive edge for Pakistani exporters over other countries in terms of tariff preferences. EU is a big market for Pakistani textile products especially, thus a big source of foreign exchange earnings for the country that faces foreign account deficit quite often. Pakistan goodwill in EU is already on the decline also because of growing religious intolerance in the country that has hugely antagonised France, a very important member of the European Union.

The government may actively engage with the countries of the EU to rally around after taking tangible steps of dispelling the impression of stifling of media that has been grappling to survive under the very difficult environment. To begin with, the Freedom of Media and Protection of Journalists Bill may be followed pro-actively instead of sending it to the Ministry of Law raising doubts about the intention of the government. The proposed Ordinance, Pakistan Media Regulatory Authority Ordinance, may also be disowned, sooner the better.

The swift and strong reaction of the civil society in general and of the journalists’ representative organisations in particular over the Pakistan Media Regulatory Authority should have given the fair idea to the officials as to how strongly the people feel about the freedom of media. The PFUJ, representative body of journalists, Pakistan Bar Council and Human Rights Commission of Pakistan, emphatically rejected the government move and expressed their firm resolve not to accept “Media Martial Law” and would launch a countrywide movement against the Ordinance.

The International Press Institute (IPI), a global network of Editors, Media Executives and leading journalists across the world working for media freedom in over 100 countries, has expressed grave concern over the Pakistan Media Regulatory Authority Ordinance. The world is also quite alarmed at the trivial tactics being used by the government to gag the media in uniformity.

The threats from the state actors continued to be herald on journalists, news editors are forced to either highlight the particular news or ignore the news or give particular slant to the same thus forcing censorship, media houses are threatened with financial ruin through the weapon of government advertisements, the life line of media, and yet the government spokesmen claim of free press in the country is reflection of the obstinate mindset.

Stifling of media seems as part of ‘hybrid system’ philosophy to shift from parliamentary democracy to quasi-democracy or altogether to a doctoral rule. The incumbent ruling elite seemingly considers the dream of ruling the country over decades may not come true under the constitution that requires fresh mandate after five years. Sadly, campaign against the media and the constitutional institutions– Judiciary and Election Commission of Pakistan — may be part of the same political philosophy fabricated to pave the way to rule the country regardless of the imperatives of legitimacy. This may be dangerous because of the real possibility of clash of institutions opening the Pandora box of political issues those stood settled under the 18th Amendment during the PPP government. The ruling elite may not dwell in the forbidden domain of the federation that may prove the shortest route to suicide. The need of the hour is to inject more of federalism and more of democracy because the country cannot afford miscalculations entailing prohibitive cost for the federation and for the democracy.

PPP will not allow the fascist tentacles to choke Pakistan democracy and constitutional rule in the country because parliamentary democracy is one of the articles of faith of the party ideology that is too sacred and cherished legacy. The party had always held the flag of the democracy high above throughout its history although it had to pay the ultimate price of its great leaders and workers in its struggle during the ferocious dictatorships of successive military rule. Democratic movements against military dictators, General Ziaul Haq and General Musharraf, spearheaded by the PPP then leadership, are indeed quite fresh in the history of government and politics in Pakistan.

Today’s democracy in the country is indeed the recurring dividends of the sacrifices of the PPP leaders and the workers in the past history. The struggle is still on. The PPP incumbent leadership may surely live up to the reputation to stand up the authoritarian and anti-people forces those are seemingly again getting together to inflict deadly blow to the constitutional rule in the country. The PPP leadership is undoubtedly committed to frustrate their designs this time too against the federation and the constitution of 1973.

History is witness that PPP had always stood for the freedom of media, and indeed actively participated in the press freedom movements launched during the military rules in the country. The PPP is totally committed to stand shoulder -to -shoulder with the journalist community in the struggle against media restrictions. Chairman Bilawal Bhutto expressed his party’s total solidarity with the journalists who became the victim of the state actors in the recent past thus conveying loudly and clearly the party would not allow the grinding down of media no matter what