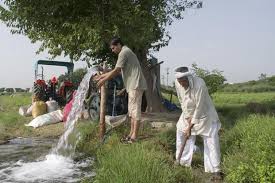 After nearly ten months of protests in different parts of Badin, April 3, 2019 saw a coordinated shutter-down strike in major towns across the district. The ongoing protests are against the persistent and acute shortage of water.

Based on news reports, protesters blame influential landowners and the local irrigation department for collusion in diverting scarce water away from smaller landholders and towns downstream. Local administration however denies this and attributes the shortage to seasonal fluctuations and reduced upstream flows.

While the real cause of the shortage might lie somewhere in the middle, it is undeniable that the local and provincial governments are responsible for allowing this issue to exacerbate over the last ten months. Even now, it seems they are either clueless or have no intent on implementing any measures to ameliorate the crisis.

With responsibility for the development and apportionment of water resources in the country, the federal government’s silence and neglect in this matter reflects very poorly on it.

The least the federal government can do now is provide data related to water flows into Sindh and explain it to the protestors, media and civil society. It must also consider providing additional water flows to the province in light of the acute shortage and work with Sindh on finding avenues for development to prevent similar shortages in the future.

The water protests in Badin are a precursor of worse to come. While the national focus is on the economy, inflation, debt and corruption, the rapidly developing water crisis is going to pull the rug from under our feet. Building dams and reducing losses in irrigation canals alone will not save us. Pakistan needs a concerted effort of investing in and modernising water resource governance in the country and bringing it at par with modern standards.

A successful future of water governance in Pakistan will comprise the following key features: water will be managed using market-based management strategies; data on water resources will be a key feature of economic planning; environmental flows will be a cornerstone of water policy; and water management will be devolved to the user-level.

As provincial governments will have to provide water for an increasing population and would like to do so by staying within the cap – thus minimising expenditure buying entitlements from other provinces – they will have an economic incentive to promote efficient use of water within the province and curtail wastage and losses. Similarly, other users of water in the province such as water-intensive industries and farmers with large landholdings would have an incentive to use water in an efficient manner to be able to sell part of their water entitlement to the government or other users for profit.

In terms of planning, a market-based approach will help provincial governments plan meaningful water policies to meet the future demand of water in the province. Consider a scenario where a province requires an additional 1000GL over a 30-year period. A water market in the country provides the province an additional option of buying water from another province instead of spending on building and maintaining its own storage infrastructure.

The province selling the water might find it economically beneficial to invest in building additional water reservoirs as it finds willing buyers of its water in the country.

Thus, the principles of a free market applied to the context of water management in Pakistan would result in some provinces becoming sellers of water and others becoming buyers. In turn, some provinces might continue specialising in agriculture while others might find it economically feasible to switch from agriculture and invest instead in other less water-intensive economic activities such as the services industry.

With the country’s increasing population growth rate and thus increasing demand for water, coupled with increasingly erratic seasonal water flows due to climate change, the current scale of agricultural activities in the country are unsustainable and efforts to expand the agricultural base of the country criminal. Instituting a water market will help areas with an economic incentive in agriculture grow organically while helping provincial governments identify regions where agricultural activities should be replaced by other sustainable options. The water scarce agricultural fields of Badin in may in the future be home to manufacturing industries that rely solely on recycled water.

In addition to water markets, all economic plans, major financial and investment deals such as the CPEC and loans secured with the IMF and other lenders should have a strategic environmental assessment conducted. This must include a high-level assessment of the impact the plans, deals and loans would have on the water resources of the country.

For example, for a multi-billion dollar investment in Gwadar, where will the required water supply come from? In providing this supply to the industry, what will be the impact on existing users? What will be the cost of ensuring existing and future users continue receiving sufficient supply? How will this cost be recovered? An example of a recommendation coming out of the strategic assessment would be to include a water recycling facility as part of the multi-billion dollar investment to ensure maximum self-sufficiency of the plants and minimum reliance on local water resources.

In addition to water markets and strategic assessments, environmental flows must be recognised as a cornerstone of water management in the country. These flows don’t just provide life to flora and fauna, they are vital in making places liveable for people. Food in rural areas is directly dependent on local crops, livestock and fisheries. These in turn rely on water bodies as sources of irrigation and drinking water and for habitat.

Unchecked extraction of water by large industries and farmholders upstream takes away from environmental flows, which has a direct adverse impact on the lives of people in our rural areas. In Badin, the protesters are also complaining about destruction of agriculture land from sea water intrusion, which can only be checked by environmental flows.

Finally, users of water at all levels must be given a direct role in the formulation of water policy and in the management of local water resources. Farmers, particularly small landholders, must be given a say in irrigation planning to ensure that they also benefit from new projects. Communities in urban areas must be given representation in water utility boards and committees. Communities in rural areas must have a say in how industries located in their villages and towns utilise local water resources.

Pakistan is far from devising a water policy and managing water resources along the lines mentioned above. No political party has a water policy to offer the country, nor any water specialists or experts in its leadership tiers to guide the country towards a solution. Sans political policy, water related government departments are managing water resources in a disjointed manner offering stopgap engineering solutions to deeply flawed governance and policy issues.

Fixing the present ills is not difficult if there is political will. Alas, the biggest barriers to reforms are the very people who have power to implement them. Our politicians, the majority of whom are large landholders and industrialists, and therefore large water users, are the biggest beneficiaries of the present setup and have no incentive to change the current state of water governance in the country.