KARACHI: Former BBC broadcaster and journalist, Raza Ali Abidi, was paid the most warm and glowing of tributes by former colleagues, peers and friends for his invaluable services to the cause of journalism and education.

Abidi was lavishly praised for having disseminated the most precious information about various fields of life through his writings, radio programmes and zest for travel and exploration at a programme titled “Aiteraf-e-Kamal”, held at the Arts Council on Tuesday evening.

His former Hurriyat colleague, Khawaja Razi Haider, most nostalgically recalled their time together at the paper and cited Abidi’s propensity to be merry and light-hearted even amid the most trying of situations.

Haider praised Abidi’s journalistic acumen and dedication and said that he often rewrote reports that were written a stereotypical manner to give them a literary flavour without compromising on the quintessential element of objectivity. “I am proud to have been Abidi’s colleague,” said Haider, adding that Abidi will live for a long, long time through his writings.

Abidi’s biographer, who also conducted the evening’s proceedings, Khurram Sohail, said, “My book may never have reached fruition had it not been for Raza Ali Abidi’s most enthusiastic cooperation.”

Noted Urdu scholar Sehar Ansari had a special word of praise for Abidi’s commanding, melodious and profound voice, which, he said, really made his accounts of events and ideas come alive. He said that one of Abidi’s greatest achievements was his translation of books pertaining to the history and culture of the subcontinent. “Even though Abidi lives in England, his heart and soul is in Pakistan,” Ansari said, while terming Abidi a role model for society.

Arts Council treasurer, Huma Mir, termed Abidi a precious national asset and praised Khurram Sohail’s enterprising spirit for having undertaken the project of writing a book on such an “august” personality.

Acknowledging all the tributes showered on him, Abidi said, “Even though I don’t think I am deserving of all these tributes, I must admit that encouragement is always most welcome.”

He narrated the hard work entailed in his visits to far off libraries the world over and in the subcontinent, as well as his 1,500 mile trip from Peshawar to Calcutta to research and write about the lives of people living along the Grand Trunk Road.

He also narrated his downstream trip from Ladakh, the catchment area of the River Indus, all the way to Kotri for the same purpose. “I may have had to work hard but it was the quest for knowledge that made it all so eventful,” said Abidi.

He also made a mention of his Rail Kahani, a project entailing nostalgia mixed with history. Abidi mentioned how, in those days, families embarking on long rail journeys carried their cooked food along with them and how the families enjoyed during the journey.

He said that he wanted to leave for posterity the sacrifices and spadework of the workers who, with the sweat of their brow, had given us such a viable railway network and the earnestness of our erstwhile rulers which, he said, was something that we have not valued and, thus, see the network in shambles today.

Among the projects he had undertaken after retirement, he said, was a book about the intense friendship between Queen Victoria and Munshi Abdul Karim.

Abidi was of the view that interviewing people of all ages and social strata was far more informative than books. Recalling the 1971 war which saw the emergence of Bangladesh, he said that it was a trying period for his conscience because he knew that what they were being forced to print was far removed from the actual situation.

Abidi also narrated the print media’s atmosphere during wartime when, every now and then, they had to duck under the tables and crowd into the underground area of Dawn, as the air raid sirens wailed.

Earlier, Arts Council Secretary Muhammad Ahmed Shah also paid rich tributes to Abidi for his intellectual acumen and services for journalism and the spread of education. 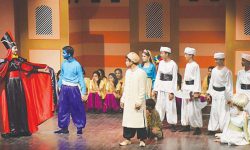 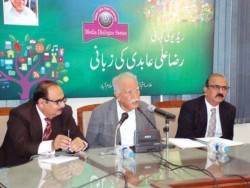