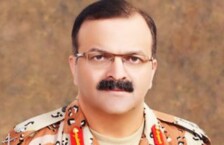 KARACHI: Pakistan Rangers, Sindh, accused the Muttahida Qaumi Movement on Monday of trying to shut down TV channels in its bid to restore terror in the city and vowed to foil it.

“Pakistan Rangers Sindh is receiving information that the militant wing of MQM is threatening local cable operators in different parts of the city to shut down dissenting and independent TV channels,” according to the spokesperson of the paramilitary force.

“These militants are trying to restore fear and terror in the city which will not be allowed to happen,” the Rangers said.

The force in a statement urged citizens to report any such activity on its Helpline 1101 for prompt action by the Rangers.