KARACHI: An exhibition marking the death anniversary of Quaid-i-Azam Mohammad Ali Jinnah, the Father of the Nation, opened at the National Museum of Pakistan here on Tuesday.

It is commendable that the museum holds exhibitions to mark almost every important national day. However, it often comes across almost as a perfunctory effort than a display put together with a purpose.

As usual, the memorabilia of the Quaid are kept on the ground floor of the spacious building and has a sense of repetitiveness to them. Still the items that have been exhibited are attractive enough to be viewed over and over.

The pictures put up on the wall are probably more interesting than some of the encased documents. The black-and-white images of the Quaid on various occasions speak for the kind of person he was. For example, a known photograph with his dogs in the foreground is a nice image. Since it is an old grab, it is a bit hazy, which ironically symbolises how we have tried to conceal some of the aspects of the great leader’s life.

Another picture, right at the corner of the wall, again a bit defocused, is of Mr Jinnah having a discussion with members of the Muslim Students Federation. But probably the most memorable image is one in which the Quaid is being welcomed in Quetta. It is a picture that shows how passionately he used to be received in that part of the country, and juxtaposing it with the current situation of Pakistan, the viewer can tell how things have changed vis-à-vis Balochistan.

Among the documents on display, there is a good number of welcome addresses, both in English and Urdu, from different organisations presented to the Quaid before partition. The centerpiece of them seems to be the address of the Muslim Students of Allahabad on Jan 5, 1938. A map of Pakistan drawn by the Meerut Students Federation presented to Mr Jinnah in 1946 also adorns the exhibition.

Then there are a few very interesting pictures of Mr Jinnah with a bunch of people belonging to different spheres of life. Only if they had captions they would have been easier to place them in history. 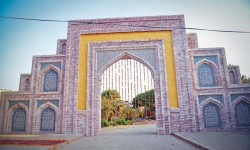