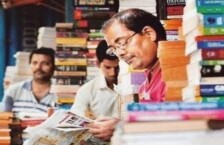 On July 23, Pakistan’s most populous province Punjab banned 100 books that were being taught in private schools for carrying “blasphemous and anti-Pakistan content”.

The step was taken by the Punjab Curriculum and Textbook Board (PCTB) Managing Director Rai Manzoor Hussain Nasir.

According to The News, Nasir said that the PCTB was reviewing 10,000 books being taught in private schools across Punjab. He said the first phase of banning 100 books included books published by 31 publishers which included Oxford and Cambridge for “blasphemous, immoral and anti-Pakistan content”.

As per Nasir, the books that were banned had “distorted facts about Pakistan and its creation, Quaid-e-Azam Muhammad Ali Jinnah [founder of Pakistan], Allama Muhammad Iqbal while these books also carried blasphemous content”.

Additionally, Nasir said that the banned books were portraying Pakistan as an “inferior country to India” and in Azad Jammu and Kashmir  was shown as part of India in maps in some of the books.

Citing examples of what was included in the banned books, Nasir said that one book on Mathematics explained counting to students using pictures of pigs. Another book published by Cambridge “tried to promote crime and violence among the students on the basis of unemployment in the country”.

Speaking to Geo, the PCTB managing director said the step had been taken under the Punjab Curriculum and Textbook Board Act 2015 [See Section 10]. He added that it was passed during the tenure of the previous provincial government.

He noted that the law had been in place for the past four years but no one was doing anything but when he was appointed in February he “decided to take action”.

Nasir said that there were over 10,000 books being examined so the banned books “could be in thousands once we are done”.

“What I have done is complete and 100 percent genuine […] Books don’t ruin us, bad books ruin us,” he was quoted as saying. He admitted that none of the authors or publishers who were “outlawed” were given a chance to be heard.   He added that a person can also be imprisoned for upto two years if they do not follow the Act.

This is not the first time that books have been banned in the province under the Act. In August 2018, authorities were directed to ensure the ban on a social studies book that printed an incorrect map of Pakistan. Earlier this year, in May, a mathematics booklet was banned for having “objectionable content”.

Meanwhile, the Punjab Assembly on Wednesday, passed the ‘Tahaffuz-e-Bunyad-e-Islam Bill 2020’, which according to a Geo report, gives the Directorate General Public Relations (DGPR) the powers to “visit and inspect any printing press, publication house, book store and confiscate any book, before or after printing”.