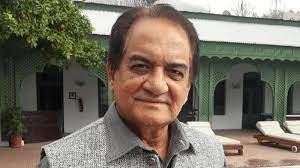 LAHORE: One of the finest actors of Pakistan who graced a number of television plays during the golden era of PTV, Aurangzeb Leghari, says if the government provides any patronage to message-oriented and socially relevant plays, quality theatre can be revived.

Mr Leghari in an interview with Dawn not only threw light on the prevalent situation of television plays but also recalled the days when he used to do theatre back in the 60s at Alhamra and how good were the plays, the direction and the scripts in those days.

He said that amidst this overwhelming commercial theatre wave topped with dare bare dances and vulgarity, only the patronisation of the government could lead to quality theatre revival. Leghari is also the chairman of the Pakistan Artistes Equity.

“If the Punjab government patronises quality theatre and the finance division allocates funds for decent morally up to the mark theatre, things could change as many artistes from the Equity could be asked to be part of such kind of theatre,” he said.

Leghari was born on Oct 25,1944, in Rahimabad, Rahim Yar Khan. He studied at the Government Central Model School, Lahore, later got admission to the Cadet College of Pataro and did graduation from the Government College Lahore.

In the early 60s, Leghari started his acting career by taking part in plays staged at the Government College, Lahore. He acted in a play in ‘Sawan Ren Da Sufna’, the Punjabi translation of Shakespeare’s ‘Mid Summer Night Dream’. The play was translated by Sufi Gulam Mustafa Tabassum.

He then started doing theatre at Alhamra with the likes of Anwar Sajjad, Kavi Khan, Firdous Jamal and other leading actors. “I did a play at Alhamra during the war of 1965 ‘Lahoo Kay Charagh’, said Leghari saying all the actors did that play with great fervour and passion.

He said in the early 60s, theatre used to be nice and decent with thought-provoking message-oriented scripts; there were no dances and below-the-belt vulgar dialogues in the plays.

He performed in over 300 theatrical plays. “We used to sell tickets of our plays by ourselves while standing on The Mall; the ticket price used to be Rs5,” he recalled.

He also assisted many film directors, such as Farid W Ahmed and S Suleman, though he acted only in one movie, Naureen. Leghari, besides being a fellow from the world of performing arts, is also a philanthropist; he is one of the directors of an orphanage named Asra where orphan children are also given modern education.

To this question about his experience of working in the Karachi showbiz industry, Leghari said the experience was not that good. “Perhaps, there is a need to work in harmony. An artist is an artist, so every artist should be given due respect and space,” he said.

He said there was a decline in the film industry in Punjab because the directors of their times did not produce their students. Good scripts and great direction were needed to produce good films as formula films won’t do any good.