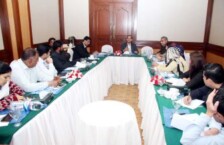 Karachi, Jan 18 (PPI):  Majority of journalists witness traumatic events and should get regular psychological counseling and medical check-ups to ensure their physical as well as psycho-social safety and productivity. Media houses also need to develop implementation of safety protocols in the field and anti-sexual harassment policies for female journalists.

These were some of the key points raised at the round table discussion on ‘Safety of Television Journalists,’ organized by the Pakistan Press Foundation (PPF) in collaboration with the Open Society Institute (OSI) here. 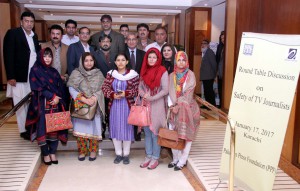 The discussion, attended by television journalists from across Pakistan  is part of a series of consultations with electronic, print, radio and digital journalists as well as other stakeholders to improve the safety of media professionals.

Journalists agreed that they themselves need to take steps to ensure their safety. Impartiality in reporting, clear distinction between activism and journalism, editorial discretion, cultural sensitivity, and awareness of safety measures were cited as key factors.

The role of media houses and owners also came under scrutiny during the discussion as participants pointed out issues including inadequate compensation, lack of medical coverage, job insecurity, focus on ‘breaking news,’ lack of safety equipment, unprofessional and underpaid support staff were cited as some of their biggest failings.

TV journalists demanded adequate and timely compensation for district reporters as well; regular arrangement of awareness sessions on hostile environment, first-aid, medical coverage; proper safety gear.  One of the participants suggested use of equipment like drones for coverage of dangerous assignments such as fires in buildings.

Press clubs need to weed out non-journalists from their member base as such individuals’ compromise credibility and safety of actual journalists. Press clubs should also open or resume induction of new members to increase unity and ensure safety of journalists. Regular medical camps also need to be arranged by press clubs for journalists, and there shouldn’t be nepotism or favoritism in the selection of journalists for training.

The government was cited as another key stakeholder that can improve and ensure journalists’ safety. Implementing labor laws, monitoring safety measures in media houses, investigating attacks on media, and passing effective safety bill are some of the areas where the government can play a key role. Identifying and banning dummy publications will also greatly improve safety standards, it was discussed. The government also needs to properly investigate attacks on media and journalists to bring an end to the culture of impunity.