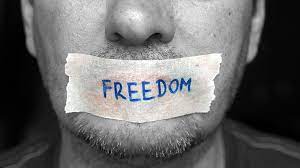 ISLAMABAD: Speakers in countrywide protest rallies on Monday condemned growing threats and violence against journalists and media workers and demanded respect to Freedom of Press and Free Speech and Expression in the country.

Journalists and media workers and members the civil society attended the rallies in all the major cities across the country which were arranged on a call given by Pakistan Federal Union of Journalist (PFUJ) after clandestine arrest of two Lahore based journalists Amir Mir and Imran Shafqat on Saturday by Federal Investigation Agency (FIA), says a press release.

PFUJ President Shehzada Zulfiqar in Quetta said that highhandedness and illegal tactics against journalists are resulting in defaming country in comity of nations. “Such tactics are used by authoritarian dictatorships and ruthless monarchies not by democratic regimes,” he said.

Large number of journalists, media workers and rights activists attended the protest rally in Islamabad in front of National Press club and demanded action against those who are responsible for illegal action against journalists and creating harassment amongst journalist community.

“Systematic denial of freedom of press and free speech and use of draconian laws is proving to be authoritarian rule in the country,” said PFUJ Secretary General Nasir Zaidi. Senior journalist and anchorperson Hamid Mir also spoke on the occasion.

While condemning the arrest of Amir Mir and Imran Shafqat the speaker across the country said that voices of journalists and rights activists are being suppressed, censorship and press advices are wide spread, owners of media houses are being forced for retrenchments but we will “continue to resist as Freedom of Press and safety and security of journalists and media workers is our main goal and mission.”