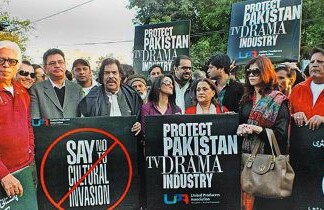 KARACHI: The government’s proposal in the new budget to impose a ‘new adjustable withholding tax’ on foreign films and teleplays on Wednesday sent gloomier signals to local exhibitors who see it as a huge blow to an industry which had just started to revive.

Critics say Pakistani cinema houses have seen themselves wrecked and broken to make way for commercial plazas since the 1980s.

“There were 115 cinemas in Karachi alone in 1970 and now you may find a matching number in the entire country,” said Adeel Imtiaz, who owns Bambino Cinema, one of the half-a-dozen theatres ransacked and burnt during violent protests against an anti-Islam American movie in September last year.

He said the government’s decision to tax the cinema industry on the pretext of foreign films was unjust.

“It is not our choice to screen foreign films in our theatres. In fact, we have to do it for survival when fewer movies are made in Pakistan,” he said.He said most theatres in Pakistan – Karachi in particular – had already vanished and cinemas such as Nishat and Prince had been burnt. In those circumstances, said Mr Imtiaz: “When one is running a cinema, one should be given special consideration instead of predatory taxation.”

Earlier, the government had put a fixed tax of Rs2,000 per day, which most of cinema owners in Karachi could not pay.

The same tax in Punjab had been waived by the previous PML-N government in Punjab and critics wonder the same party had ‘targeted’ the fragile industry when it came to power in Islamabad.

The Pakistan Film Exhibitors Association (PFEA) is not pleased either with the new withholding tax, saying it would take up the issue with the federal authorities before the proposal is formally approved by parliament.

“We’ll certainly talk about this with the authorities. It is utter injustice to an industry which has refused to die,” said Nadeem Mandviwalla, who heads the PFEA’s southern region, while talking to Dawn.

He said Pakistan cinema industry had started breathing on its own in 2009 after remaining for several years on ventilator when the government permitted the screening of foreign movies, Indian movies in particular.He said the decision was taken at a time when Pakistani moviegoers had just resumed taking interest in the industry and investors had started to or were mulling investing in it.

“This decision will certainly deter the rebuilding process; it will discourage new investment and spawn the worst kind of uncertainty among those involved in it. A cinema needs at least Rs250 million to be established, but such official decisions will stop people from investing their money in this sector.”

Saeed Rizvi, who heads the film producers association, said by taxing foreign films the government had ‘legalised’ the business and did no good for reviving indigenous moviemaking.

“However, no incentive has been introduced for the local film industry,” said Mr Rizvi.

Samina Ahmed, a veteran TV artiste and ex-president of the United Producers Association, said the withholding tax on foreign TV dramas was a good step taken by the government.

“We hope such action will discourage our TV channels from broadcasting foreign dramas at the cost of local TV industry,” she said.

Broadcasting of Turkish, Indian, Iranian and European teleplays dubbed in Urdu is in vogue in Pakistan, causing furore and rage among the local artistes and producers, who have launched a campaign against it.

Ms Ahmed said several local production houses had started staff lay-offs while many smaller organisations had called it quits because of lack of business.

“Not just artistes, writers and producers, but a large number of people who are associated with the business in many ways have felt the brunt because of the unregulated broadcasting of foreign teleplays.”

She said the government should also make the broadcasters have mandatory import licences for Turkish and other plays.