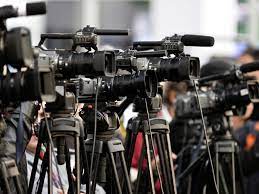 ISLAMABAD: Opposition political parties on Monday threw their weight behind the journalist community in rejecting the proposed “black law”— Pakistan Media Development Authority (PMDA) Bill 2021 — as journalist fraternity vowed to continue their struggle till achieving the ultimate goal of reversal of the controversial decision.

Several journalist organizations had staged a sit-in protest outside the Parliament House on the call given by Pakistan Federal Union of Journalists (PFUJ), which was participated by a large number of journalists from across the country, leadership of the opposition political parties, and representatives of the civil society who with one voice rejected the proposed PMDA and warned the government of more protests, if the decision was not withdrawn.

As the two-day sit-in protest ended on Monday with an announcement by the PFUJ president Shahzada Zulfiqar that the struggle for freedom of the press would continue and the next course of action would be announced in the PFUJ’s Central Executive Council meeting to be held from September 15-17 in Lahore.

Leaders of the mainstream opposition political parties including Pakistan Muslim League-Nawaz (PML-N) President Shehbaz Sharif, Pakistan People’s Party (PPP) Chairman Bilawal Bhutto-Zardari, Jamiat Ulema-e-Islam-Fazl (JUI-F) chief Maulana Fazlur Rehman along with their respective parliamentarians visited the protesting journalists to show their solidarity with them. While addressing the participants, they assured their complete support against the proposed law and also announced to challenge it in the Supreme Court, even if it was passed by the joint sitting of the parliament.

A Muttahida Qaumi Movement-Pakistan (MQM-P) delegation led by Minister for Information and Technology Aminul Haque also visited the protesting journalists and expressed solidarity with them on behalf of his party.

The MQM-P minister said his party has a clear stance on the PMDA –that all stakeholders should be made a part of any media-related legislation. He requested the government to talk with the journalists.

In his address, Shehbaz Sharif, who is also leader of the opposition in the National Assembly, strongly condemned the proposed “draconian” PMDA law, saying that he is visiting the protest camp on the direction of party Quaid Nawaz Sharif to assure the journalist fraternity that they would not let the government pass the law.

He said that all the nine opposition parties under the umbrella of Pakistan Democratic Movement (PDM) would continue to support the journalists in their struggle for freedom of the press.

“I would also like to assure you that we will continue to stand by you [the journalists], unless we burry this black law,” Shehbaz assured the journalists, adding that he would also speak with opposition parties other than the PDM, including PPP and the Awami National Party (ANP) to chalk out a joint strategy against the proposed PDMA.

PPP chairman Bilawal Bhutto Zardari, in his address, stated that PPP is on one page with the rest of the opposition political parties and the journalist community in condemning and rejecting the proposed “draconian” law.

He said that this is not the first time the journalists are protesting against a “black” law, adding that the journalist fraternity fought against similar laws brought by dictators General Ayub Khan, General Ziaul Haq, and General Musharraf.

He recalled that after taking charge as the prime minister, Benazir Bhutto had abolished all restrictions against journalists.

“We had removed all restrictions imposed by General Musharraf and cleansed the Constitution from all such restrictions and black laws through the 18th Amendment,” he said.

He said that the PPP is against the PECA (The Prevention of Electronic Crimes Act) and the proposed PMDA.

“This proposed PMDA is an attack on journalists, democracy, judiciary, and the right of employment of journalists. We will oppose this PMDA in parliament and every forum. PPP jiyalas will join you wherever you give a call all over Pakistan,” he assured the protesting journalists.

He said that the draft of the PMDA is the same draft which the government wanted to impose as an ordinance.

He also spoke about sacking of 20,000 government employees ‘unjustifiably’, who were also staging a protest demonstration alongside the journalists in favour of their demands.

“If the parliament can reinstate the chief justice of Supreme Court then why can it not reinstate the sacked employees? These employees were first sacked in 1997 when they were about 30 years old and now they are sacked again when most of them have crossed 50 years of age,” he added.

To a question, he stated that he has very good relations with all of the opposition parties and their leadership including Maulana Fazalur Rehman, saying that Maulana is doing politics for decades with the PPP and he has a lot of respect for him. “We can have difference of opinion politically,” he added.

“As long as the question of legitimacy of this government is concerned, all the opposition parties consider it as an illegitimate government. We wanted and still want to bring a no-confidence against this government because we have proved that the government could be dislodged in this way,” he added.

Bilawal maintained that the way the prime minister and his ministers drag a “certain institution” in politics makes that institution controversial.

He said that the capable and renowned journalists can fight this war way better as they are known and respected internationally and they are accepted as impartial journalists.

He said that it is pointless to link Defence Day speech of the army chief to this black law PMDA, as the minister of information is doing.

JUI-F chief Maulana Fazlur Rehman, in his address, termed the proposed PDMA as “Pakistan Media Danda Authority” and vowed that his party and the PDM would continue to oppose it.

“Democracy and media are inter-linked. Where there is dictatorship there is no free media,” he asserted, adding that democratic politics is always in the favour of media’s freedom.

He further stated that his party will not accept laws that contradict the Constitution.

“All of us are united on the freedom of media. The JUI-F was the first party to decide to oppose the proposed PMDA,” he maintained.

Maulana, who is also president of the PDM, stated that there is a proposal of a protest march towards Islamabad, which would be deliberated upon within the PDM for an effective anti-government protest.

PFUJ president Shahzada Zulfiqar, in his address said the entire media of Pakistan is united against the PMDA Bill 2021, adding that the struggle will continue till freedom of the media.

He said that journalists would not only continue their protests but also seek legal remedies – moving superior courts against the controversial bill.

“We would exhaust every forum for the protection of our rights. We would not let this government snatch our hard-earned freedom,” he said.

Senior journalist Nasir Zaidi termed the PDMA as a draconian law, saying that the journalist community would continue to struggle till the government review its decision.

He said that the proposed establishment of media tribunals would be empowered to hand punishments of up to three years in jail and Rs25 million in fines to content producers for violating the repressive new provisions.

He said that the proposed law is nothing less than imposing a “media martial law”.