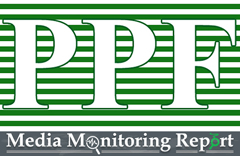 The office of National Assembly’s speaker has announced its decision to lodge a complaint against television channels with Pakistan Electronic Media Regulatory Authority (PEMRA) for airing alleged fake news aimed at maligning the speaker and wrote a letter to the authority against parliamentary reporters.

In a meeting, PEMRA has included two additional clauses in its Direct-To-Home (DTH) TV service’s licensing policy. The license holders will now provide the platform without any discrimination against the authority’s license holder TV channels and leading right permission holders and run all the channels of the same category at one place. The meeting also discussed the execution of policy against illegal Indian DTH TV service.

PEMRA Chairman Absar Alam also informed the members about the press conference of August 31, in which Oct 15 deadline was announced for ending illegal happenings that include sale, import and running of DTH equipment.

The news story was covered on September 9 by only three leading newspapers – Express Tribune, Jang and Nawa-i-Waqt.

Sindh High Court (SHC) on September 6 termed the federal government’s contentious ban on film Maalik as illegal and cleared the movie for screening.

The News and Dawn on September 7 reported that the federal government had imposed a ban on Maalik movie released on April 8 countrywide, declaring it uncertified. SHC Chief Justice Sajjad Ali Shah reserved the judgment of the last hearing of the petition filed by the director and producer of film Asher Azeem.

LHC also issued a notice to the film censor board and federal government on a petition seeking a complete ban on display of Indian movies in Pakistan.

The News and Jang on September 6 covered stories of PEMRA about its show-cause notice against Geo News channel for telecasting unproven report about Jalil Abbas Jilani, Pakistan’s Ambassador to US.
Geo News aired a news report stating that on the Parents’ Day, Jalil Abbas Jilani was seen in a photograph with Michelle Obama, the wife of US President Barack Obama, which was also shared on social media. The news also stated that this practice of the Pakistani ambassador insulted Pakistan worldwide. India had broadcasted this news negatively.

After this news, Jilani approached PEMRA and written a letter to its chairman in which he refuted the incident and stated that the irresponsible coverage of Geo News has provided India an opportunity to start a propaganda against Pakistan. If the channel could not provide an acceptable reply, PEMRA can cancel its license or impose Rs 1 million fine on it.

The above mentioned story was covered by only two newspapers which did not contain defending statements from Geo News. However, other newspapers did not cover the story.

Islamabad High Court (IHC) on September 7 reserved its judgment on a petition filed by a private TV channel against the PEMRA’s decision to ban its programme “Live With Dr Shahid Masood” for 45 days on September 7.

ARY News on September 7 aired ticker and breaking news, while The Nation and Dawn on September 8 reported that Justice Aamir Farooq, after hearing the arguments of the both parties, reserved its judgment on the petition. PEMRA’s counsel Ali Gillani said that the television anchors cannot be permitted to vilify people.

Both the newspapers covered the story with complete facts and the statements from both the parties without any bias. ARY News did not cover the balanced story in this regard as it did not treat both the parties equally and not contain any statement from PEMRA.

Council of Pakistan Newspaper Editors (CPNE) has introduced a skill development committee to provide professional training to the newspaper and magazine journalists.

The committee was introduced by CPNE President Zia Shahid. The CPNE general secretary issued a statement that said in a recent meeting of the standing committee, the skill development committee was approved with the aim to provide professional training and skills to the individuals of the newsroom, editing and other department of magazines and newspapers. The committee will consist of 32 members. Its chairman will be Dr Waqar Yousaf Azeemi, Editor Mahnama Roohani Digest, whereas Deputy Chairman will be Syed Muhammad Munir Jilani, Editor Roznama Paigham.

On September 7, different newspapers covered the story, which include Express Tribune, Roznama Express, Nawa-i-Waqt, Intekhab, and Roznama Pakistan. Except Nawa-i-Waqt, all other newspapers mentioned the names of all members of skill development committee.

Regional Times reported that different workers from print and electronic media attended the workshop. Senior journalist Qazi Asif was the trainer and Shahzada Zulfiqar the co-trainer, while Naseem Shaikh was the coordinator. In the end, certificates were also presented to the workshop’s participants.

The News on September 7 reported that the Anti-Terrorism Court (ATC) has granted a bail to three female workers of Muttahida Qaumi Movement (MQM) involved in media house attack case.

Another news by Dunya newspaper on September 11 reported that ATC has postponed the bail plea of two MQM workers involved in media house attack case till September 16. The same day, Dunya newspaper also covered a news report according to which British home office has handed over the reference of Pakistan to the metropolitan police that have assured to investigate the case against its citizen Altaf Hussain, allegedly involved in the August 22 incident of making provoking speech and inciting attack on a media house.

Roznama Express on September 6 reported that a private television channel’s cameraman was injured in the eye with a football. Sindh Sports Minister Muhammad Baksh Maher visited the Sports Gala of NED University of Engineering and Technology. In this news story, the writer did not mention the names of cameraman and the TV channel with which cameraman belongs to.

Four unidentified persons abducted a reporter from Shab-e-Qadar market. Since the abduction, no one has accepted the responsibility. This news story was covered by Amn newspaper. The news is important for the readers, but the writer neither mentioned the name of the reporter nor the media house’s name with which he belongs to.

Intekhab on September 10 reported that Wapda officials attacked the house of a senior journalist and member of Press Club executive committee Muhammad Afzal, tortured women and children in district Khairpur and also took away expensive household goods and money over airing news against Wapda. They also threatened them not to protest against them.

A ticker aired by ARY News on September 8 stated that police personnel pushed out the media persons from the police station. The station’s name was not mentioned in this ticker.

On September 7, it also reported that controller home Islamabad, Fayaz Baloch visited Radio Bhit Shah Station. During his visit, Farhan Abbas, Director of the station informed him about the problems faced by the station.

NewsOne on September 8 also aired a ticker while Intekhab newspaper on September 9 covered the story that security personnel did not allow media persons to enter the polling station for covering the local body elections of Sindh Assembly constituency PS-127.

It is pertinent to mention here that the project to solve the problems facing journalists and media houses in Karachi was started during the interior minister’s last visit to Karachi. It was also decided in the meeting that the CPNE security committee will look into this project.

ARY News on September 6 aired a ticker showing identification parade of accused involved in looting journalists. In this news, no institution’s name was mentioned.

On the same day, ARY News, Jaag TV and Samaa aired a breaking news that Imran Khan visited the offices of all three TV channels in Karachi after attack on media houses in the metropolis. Jaag TV also aired a ticker of Imran Khan’s statement in which he said, “Attack on media is an attack on democracy.”

NewsOne on September 6 aired a ticker about Federal Minister Parvez Rashid’s statement in which he said that the government will provide every possible resources for journalists’ security.

92 News on September 7 also aired a ticker which stated that two unknown persons snatched a bag of its woman reporter.

Geo News on September 7 aired a ticker that “there should be a policy to release arm licenses to higher judiciary judges, media houses and educational institutes,” said Home Minister.

Geo News in its programme “Aaj Shahzeb Khanzada” covered the statement of SSP Malir Rao Anwaar in which he said, “I’ve informed reporter of Dawn Newspaper that attackers belong to MQM Haqiqi.”

Express Tribune and Roznama Express on September 11 reported that Express News has exceeded 10 million likes on social networking site ‘Facebook’, leaving behind the likes of CNN and BBC World. The biggest media brand has also 1.3 million followers on twitter. In this news story, the writer has only praised his own media organization.

Dawn News channel on September 5 aired breaking news that the Federal Board of Revenue (FBR) on the basis of media reports has issued notices to offshore companies’ owners.

On September 6, ARY News, NewsOne and Express News aired tickers covering the statement of Army Chief in which he said that Ulma, intellectuals and media should spread the peaceful message of Islam.