PPF says as many as 20,700 women in Karachi out of voters’ lists | Pakistan Press Foundation (PPF)

PPF says as many as 20,700 women in Karachi out of voters’ lists 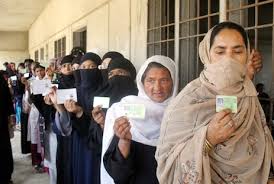 KARACHI: Pakistan Press Foundation (PPF) released a report on Friday suggesting that as many as 20,700 women of South Karachi District are out of voters’ lists, mainly because they have not issued computerised national identity cards (CNICs).

This was expressed at a press conference that was held by PPF in collaboration with FAFEN at Karachi Press Club (KPC) on the subject of “Improving women’s participation in the electoral process”.

PPF, a member of Free and Fair Elections Network (FAFEN), has requested the National Database and Registration Authority (NADRA) and Election Commission of Pakistan (ECP) to take urgent steps so that these women could exercise their right to vote in the coming general elections.

PPF Project Coordinator Naseem Akhtar Shaikh said that from July 2017 to April 2018, more than 22,000 women in District South Karachi who were not issued CNICs.

PFF assisted 1,300 women in getting their CNICs and more than 3,000 others in reaching the NADRA centres of District South so that they could be registered as voters.

PPF during a special drive of ECP, for registration of voters, also went house-to-house in 125 statistical blocks of District South to pinpoint the women who were not issued the CNICs.

With assistance of EPC and NADRA officials, many of these women were facilitated in connection with issuing those CNICs and getting them registered as voters, either at their doorstep or at the nearest registration centres.

A mobile van of NADRA was arranged for fulltime and another on part time basis to expedite this process. NADRA official centre at Chakiwara, Lyari extended valuable cooperation in this regard.

PPF also facilitated six vision-impaired male and female members of a family in getting their CNICs. Moreover, 240 non-Muslims women were also assisted to get their CNICs.

PPF officials said that without their own cooperation, it would be impossible to facilitate so many women in getting their CNICs and votes registration.

However, PPF appealed NADRA and ECP to do the needful so that these out-of-electoral rolls women could also exercise their right to vote in the coming general elections.

Daily Times: For lack of CNICs, 20,700 voting-age women out of electoral rolls in District South

The Nation: 20,700 women ‘out of electoral rolls’ in South District