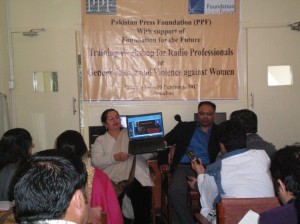 Gender discrimination and violence against women can be minimized by the effective use of media particularly Radio in the remote areas of Pakistan because radio was the major source of information, awareness and entertainment in the rural areas. Radio can be heard by those who were less educated with less information and did not have facility of electricity or they don’t have access to TV channels and Newspapers.

This was observed by the participants of a 3-day training workshop for Radio professionals on “Gender Justice and Violence against Women”, which was organized by Pakistan Press Foundation in collaboration with Foundation for the Future on 30 January to 1st February, 2012 in PPF Training Center at Islamabad.

17 Radio professionals including 03 female participants from all over the country, Federally Administered Tribal Areas (FATA) and Azad Jammu Kashmir participated in the workshop.

The participants said that violence against women could be minimized by increasing awareness at gross roots level. They said that radio was a powerful and cheaper source of information and mobilization tool to create awareness on gender justice and help in eradicating violence against women from society.
As the listenership of radio was higher in rural areas as compared to the urban areas, campaigns can be effectively run to sensitize the people about gender. Journalists can raise social issues with gender perspective and create awareness through their programs at local level.

The participants said that VAW was a main obstacle in development of the society. The womenfolk had been facing all kinds of violence including murder, rape, kidnapping, forced marriages, early age marriages, killing in the name of honour, harassment at workplace, depriving of right to vote etc. Radio and other media sources can be helpful in eradication of all kinds of violence against women.

During workshop, it was also stressed that there should be gender sensitivity while reporting the cases of VAW particularly rape and sexual assault cases. The name and picture of survivor/victim should not be published or telecast.

The participants said that women should be considered as human being and resources should be given to both women and men equally but keeping in view the equity as well. Need to acknowledge women for their achievements were also stressed.

While expressing views during two panel discussions on “Gender Justice and VAW” and “VAW and the role of media and CSOs,” Director General of Pakistan Broadcasting Corporation, Mr. Murtaza Solangi, Dr. Rakhshinda Parveen of Society for the Advancement of Community, Health, Education and Training (SACHET), Ms. Shahnaz Bukhari of Progressive Women Association (dealing with acid and burn survivors) and Ms. Erum Javed of UNDP said that no society can develop without full participation of women in every walk of life and women should be made independent and economically sound.

Trainer Mr. Saeed Minhas said that the uniqueness of the workshop was that it helped gauge the progress of the participants in the realm of specific (gender, justice and development or democracy) reporting and editing skills by using participatory approach and collective learning methodology. He added that putting all journalists, having variety of backgrounds and cultural/social settings, in Islamabad environment certainly helped them to repeat and master the basics of reporting, editing and sourcing skills from a different perspective, which is more federal in nature and more elusive to their respective environments.

It was recommended that a field exercise should be considered a must, as it will help journalists to get into the groove and sharpen their skills.
During workshop, the participants were engaged in interactive and practical exercises, where colorful cards, flip charts, drawing board, role-playing, and power point presentations were used, where and when needed. The participants were asked to produce a skillful and balanced piece of news report and one feature report during the course of three days. All 17 participants prepared one news package and one features for radio on gender related issues and VAW.
The participants were also given the task to produce one feature report upon returning to their respective workplaces and send the same to PPF for sharing with all others through its website.