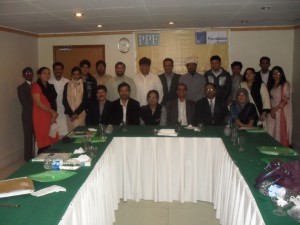 Pakistan Press Foundation in collaboration with Foundation for the Future organized a 3-day training workshop on “Gender Justice and Democracy” for Radio professionals, from 28-30 December, 2011at Mehran Hotel Karachi.

20 Radio professionals including 04 female participants from all over the country, Gilgit-Baltistan, Federally Administered Tribal Areas (FATA) and Azad Kashmir participated in the workshop.

Participants said Radio was the only source of information, awareness and entertainment in rural areas as it can be heard by those who were less educated and did not have facility of electricity or they don’t have access to TV channels and Newspapers. It is powerful cheaper of source of information and mobilisation about democracy and gender justice within masses.

Journalists can raise social issues with gender perspective and create awareness through Radio programmes in the rural areas, where the ratio of listeners was more as compare to urban areas.

The participants said that there was a need to work and highlight Gender Justice and this workshop is a good initiative in this regard. The participants emphasized on continuation of such workshops in order to create more awareness regarding gender justice, poverty and Violence against Women (VAW) and enhance the capability of the Radio Professionals regarding Gender Justice and Democracy.

The participants said that accurate facts should be reported by the journalists as they are the biggest information-bearers. Besides, freedom of expression should be balanced.

It was also pointed out by participants that in some rural and tribal areas, women were not even allowed to make their CNICs and they do not have any access to information as well. Radio can play pivotal role in changing mind sets and elimination of patriarchal behaviors. Women were being used as commodity and their portrayal on the basis of sex in electronic media should be stopped. Women should be considered as human being and resources should be given to both women and men equally but keeping in view the equity as well.

In democratic society access to justice becomes easier and that would help in strengthening gender justice. Participants said in patriarchal society women were not being acknowledged for their achievements in different fields but their successes should be acknowledged.

Participants said VAW was the huge hurdle in the development of the society. Women had been facing all kinds of violence including murder, rape, kidnapping, forced marriages, early age marriages, killing in the name of honour, harassment at workplace, depriving of right to vote etc. Radio and other media sources could be helpful in eradication of all kinds of violence against women. We should focus on behavior change from childhood.

Ms Noor Naz Agha, president Human Rights International Alliance and advocate Supreme Court of Pakistan said that the Article 25 of the Constitution of Pakistan says: “There shall be no discrimination on the basis of sex and special laws shall be made to protect women” but the constitution was not fully being followed by rulers. There were discriminatory laws against women and religious minorities which should be repealed.

On the occasion, Secretary General of the Pakistan Press Foundation (PPF) Mr. Owais Aslam Ali said that Media can create awareness among the masses regarding gender issues and can bring behavioral changes in society through its programmes and Radio is an active source of information and awareness in the rural areas of the country. He added that the main purpose of organizing the workshop is to enhance the capacity of the Radio professionals, by strengthening local radio journalism and create a national radio news network to share experiences and content.

After 5 Ws and H, new concept of “So what” is being considered, which shows the continuation of event, its repercussion/ impact on the people with updated info. Sources should be mentioned in news reports. Intro of the news should not exceed 20 words and factual information should be given.

Trainer Ms Farhat Parveen said that the work of majority of the women is not being counted. Work is what you are being paid for. In our society, the women’s status is very weak and we need to work on that.

The trainers of the workshop, Ms Farhat Parveen and Mr. Saeed Minhas gave presentations, held extensive discussions with the participants on the Gender and Sex, the role of the media, content making, Gender sensitization, types and skills of reporting, news writing and feature writing and gave exercises with the participants. The participants made features for Radio during workshop as an assignment, while they were asked to send one more feature with special focus on gender from their stations.

Those features which were made by the participants during workshop were played during the sessions and the participants came up with different suggestions after a detailed discussion and critical analysis.

Participants suggested increasing the duration of workshop from 3 to 5 or 6 six days, so that practical activity and learning can be more effective due to sufficient time.

At the end of workshop Mr. Owais Aslam Ali, secretary general of PPF awarded certificates among the participants.