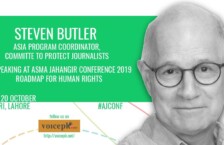 Pakistan Press Foundation (PPF) is alarmed by the Federal Investigation Agency’s (FIA) detention of the Committee to Protect Journalists Senior Program Consultant Steven Butler upon his arrival in Lahore. The authorities must explain the basis for his temporary detention and questioning for over eight hours.

According to Geo, Butler was detained by the FIA at Lahore’s Allama Iqbal International Airport upon his arrival to participate in the Asma Jahangir Conference 2022.   Butler was told that he was on a “stop list” of the Interior Ministry. He was released following the ministry’s approval.

This is not the first time Butler has faced difficulty on arrival in Pakistan. In 2019, Butler had been stopped from entering the country by immigration officials because his name was placed on a stop list.

PPF urges the authorities to investigate the decision to place the name of a media freedom advocate on a ‘stop list’ and to detain him for hours on end without any basis specified. It is alarming that such stop lists are in place for the media and we urge the government to review the inclusion of names of journalists and press freedom advocates on such a list.