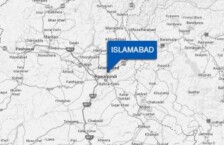 ISLAMABAD: A meeting of leaders of various political parties, media and civil society organisations was held in Islamabad and the participants expressed serious concern over growing threats to freedom of expression, safety of journalists and press freedom.

According to a press release, most participants apprehended that the threat to press freedom may culminate into a greater threat to overall democratic values and constitutional framework.

Despite serious reservations expressed by some of the participants about the conduct of the media, the participants resolved to defend press freedom and oppose a ban on any media organisation.

The overall view was that with great freedom comer greater responsibility. Media requires a code of conduct without allowing the executive to undermine freedom of expression. The participants emphasised that all state institutions must follow a lawful course instead of resorting to strong arm tactics.

The participants called for ensuring economic rights and freedom of working journalists. On the current ongoing tussle between Geo and certain state institutions, the participants appealed to the parliament and the government to play their due role in ensuring due process of law. Representatives of PPP, PML-N, ANP, National Party and various media organisations participated in the meeting.