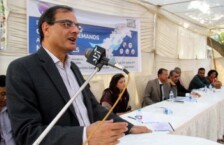 KARACHI, Jan 23 (PPI): Speakers at a moot said on Monday that it is the need of the hour that our political parties introduce the culture of democracy and accountability in their inner structures and focus on pressing needs of common man.

“The demands and aspirations of voters need to be taken seriously by the political parties and properly incorporated in their manifestoes before coming general elections,” they said while addressing District Convention on “Charter of Demands and Party Manifesto”, organized by Pakistan Press Foundation (PPF) in collaboration with Free and Fair Election Network (FAFEN) at Karachi Press Club (KPC). The event was attended by representatives of political parties, NGOs, Transgender Association, college students, minorities, and a large number of women from district South areas of the metropolis.

The objective of the convention was to present Charter of Demand to the heads of political parties for inclusion in their respective party’s manifestoes.  This Charter of Demand was prepared by Civil Society Alliance comprising social organizations of lawyers, laborers, trade unions, teachers’ associations and minorities. The Charter of Demand highlights education, health, administrative, human rights, labor, minorities, and unemployment and transport issues.

While delivering welcome speech, Owais Aslam Ali said that all major political parties had given insufficient attention towards the actual issues faced by the public in their election 2013 manifestoes.

He said that the political parties had tried to maintain the status quo and none of them were ready to make any change on the economic, social and political fronts. They are also not ready to carry out proper redistribution of resources in the society, he added.

Sorath Thebo, Member of Provincial Assembly, of the PML-N, said that similar challenges of unregistered women voters across interior Sindh. She added that her party is committed to voter registration and structural reforms for greater democratic participation. 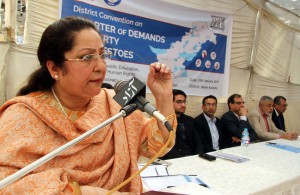 She said that it was in 2012 that transgenders were given the right to list themselves as a third gender on their CNICs. They were also promised much more. She further said the Supreme Court had ordered provision of free education, health and other facilities for ‘Khawaja Sarra’ community.

“As they now have CNICs, so they should also have access to welfare schemes like the Benazir Income Support Programme.” But the provincial social welfare departments have still not implemented the court decision, she added.

Muqtada Mansoor said that the local government is a basic ingredient of democracy. He said the present government was at first not inclined to hold local government elections apparently due to two reasons: one that they did not want to pass on any powers at the grassroots level; and second that they were not prepared to part with any funds.

“This has resulted in the formation of a system which is again destined for doom because without any financial or administrative powers, it will not be possible for these elected bodies to help the poor in this country,” he concluded.

The Express Tribune:Elections 2018: ‘Make resolution of people’s issues a priority’