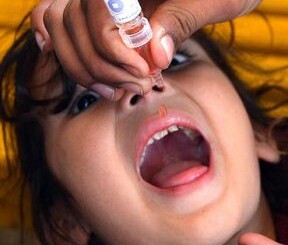 KARACHI: The polio vaccination refusals declined by about 60 per cent in 2012 when compared to 2011, says State of Human Rights in Pakistan, a report compiled by non-governmental Human Rights Commission of Pakistan (HRCP).

But Pakistan continues to be one of the only three countries in the world where polio still exists – the other two being Afghanistan and Nigeria.In 2011, 198 polio cases were reported in 60 districts of Pakistan, while in 2012, 58 cases were reported from 28 districts including Gilgit, its first-ever case of polio.

Citing the Pakistan Polio Eradication Initiative and Unicef, over 0.5 million children were missed in the October polio campaign, which included 45,000 refusals. Khyber Pakhtunkhwa (KP) and FATA remained the most difficult regions for the administration of polio vaccine due to the presence of Taliban militants who had banned immunisation. This was especially the case in South and North Waziristan, where consequently the highest number of polio cases were reported in 2012 – KP (27) and FATA (20). Five female health workers vaccinating children against polio were also shot dead in Pakistan in a series of attacks blamed on Islamic militants. One victim was a 17-year-old schoolgirl who had volunteered to work as a vaccinator.

“Polio eradication campaign in Pakistan has failed because of massive corruption from the procurement of vaccine and distribution of drops to target population,” ex-Pakistan Medical Association General Secretary (Centre) Dr Shershah Syed told The News.

“All federal and provincial health departments are not serious about its eradication. Lots of project directors believe that complete eradication will make them jobless and they will lose all perks and facilities if the campaign succeeds”, Dr Syed said.

“If the newly-elected government wants a successful programme they have to strengthen existing EPI programme in Pakistan and appointment of directors on pure merit and at the same time all family physicians and midwives should be involved in the programme,” he went on to say.

The Economic Survey of Pakistan 2011-2012 reported that the country lagged behind other South Asian countries in terms of the infant mortality rate, which were 63.26 deaths per 1,000 live births. There was a marginal decline in both compared to the preceding year but it was still inadequate to meet the Millennium Development Goals. PMA blames low expenditure on the health sector for the dismal state of health in Pakistan and has recommended that at least six per cent of the gross domestic product (GDP) should be spent on health.

Pakistan faced a measles outbreak late in 2012 as a result of which at least 306 children lost their lives. The measles incidence in 2012 witnessed a surge of nearly five times over the previous year when a total of 64 fatalities were reported. The jump was most pronounced in the Sindh province, where measles killed 210 children in 2012 whereas 28 children had died there the previous year. A total of 14,687 measles cases were recorded during 2012 (as against 3,890 in 2011) and 1,879 of these cases were reported from the flood-affected districts.

A report released by Save the Children on child malnutrition in February 2012 stated that Pakistan, Bangladesh, India, Nigeria and Peru accounted for more than half of the world’s malnourished children and in Pakistan it accounted for 35 per cent of the deaths among children under the age of five.

The report also warned that if concerted action was not taken, Pakistan would have the highest percentage of stunted children population over the next 15 years.