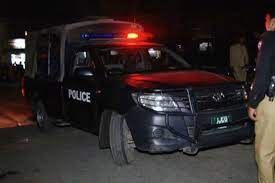 HARIPUR: The district police officer, Haripur, has sent three constables accused of torturing a journalist to the police lines and initiated a departmental inquiry against them, police said here on Saturday.

According to Zaheer Abbas, a Rawalpindi-based cameraman of a private TV channel, he was on way back home after shooting a news package on Khanpur reservoir for his channel when he saw policemen beating some people on the roadside which he also captured on his camera.

However, the policemen allegedly snatched the camera from the journalist and thrashed him publicly before putting him in the police van.

They took the journalist to the police station and allegedly tortured him for making their footage.

However, on the intervention of local mediapersons the injured journalist was taken to Haripur Trauma Centre for treatment.

On the complaint of journalists, DPO Kashif Zulfiqar sent the constables Sajjad Khan, Ali Raza and Hasan Ali to the police lines. He has appointed Khanpur DSP Abrar Khan as an inquiry officer to probe the incident and submit a report within two days.

Meanwhile, the members of Haripur Press Club, office-bearers of Haripur Union of Journalists and Electronic Media Association demanded registration of an FIR against the three constables.