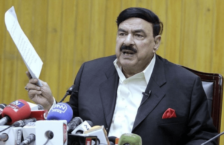 He alleged that the PML-N supremo had become an active member of an “alliance” in London that was conspiring against the China-Pakistan Economic Corridor (CPEC). “Mr. Khan sees the latest developments in London (Mr. Sharif’s speeches, etc) as [part of activities of] the alliance against the CPEC,” he said.

“As the PM, he (Imran) gave permission for airing Nawaz’s speech but he was wrong. Had I been there, I would have never allowed this,” Mr. Rashid said while responding to media queries in a press conference here on Saturday.

He said the decision was taken by PM Khan on his own as he believed that it (Mr. Sharif’s speech) would perhaps expose the PML-N supremo. “But if it were up to me, I would not have wanted Nawaz to speak that day,” the minister added.

He warned PML-N vice president Maryam Nawaz to stop attacking him in her press conferences/media talks. “Maryam sahiba, I am giving you a final warning. I can disclose some news that can cause a political earthquake in this country. I respect you because you are a woman,” he said.

Mr. Rashid said former premier Sharif had taken over the PML-N and was not ready to trust anyone except his daughter.

“The Pakistan Army is a great force, but Nawaz Sharif has waged a war against it,” he said.

The minister claimed that Mr. Sharif and his daughter had stayed silent for a year and 10 months under a plan. “Why did Nawaz and Maryam remain silent? I say under oath that they did this because they were bargaining for relief. Some of our [friendly Muslim countries] are witness to this,” he claimed.

He reiterated that the PPP would never tender resignations from assemblies.

Earlier, talking about his department, the minister said the Pakistan Railways had decided to privatise 34 more passenger trains in near future. “Twelve trains have already been outsourced and 34 more are set to be outsourced soon in addition to six freight trains,” he said.