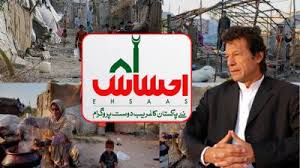 The Prime Minister tweeted about the issuance of his statement of the programme and said, “I am pleased to release my policy statement on Ehsaas, my priority, poverty reduction programme with its four focus areas and 115 policy actions to reduce poverty, invest in people and uplift lagging districts.”

The Prime Minister Office released 15-page document on policy statement. “Ehsaas is the biggest and the boldest programme for the poor ever launched in Pakistan. The government looks forward to working with all stakeholders – public, private, civil society, philanthropists and expatriate Pakistanis – to ensure that we deliver on our promise of lifting millions of people out of poverty and build a strong foundation together for a stronger, safer and successful Pakistan,” the policy statement says.

The Prime Minister says in his policy statement that the first pillar encompasses 25 policies, which include a new constitutional amendment to move Article 38 (d) from the “Principle of Policy’ section into the ‘Fundamental Rights’ section. This change will make provision of food, clothing, housing, education and medical relief for citizens who cannot earn a livelihood due to infirmity, sickness or unemployment, a state responsibility.

He explained the four pillars also include addressing elite capture and making the government system work to create equality; safety nets for disadvantaged segments of the population; jobs and livelihoods; and human capital development. He has reiterated his resolve that Ehsaas is about the creation of a welfare state.

A need-based system in the framework of new Finance Commission Award to promoting poverty reduction and addressing inequalities, requires improving mechanisms that regulate allocation of financial resources and creating the right incentives to deliver on services for citizens. To this end, members of the Council of Common Interests (CCI) will be encouraged to improve the allocation formula to achieve our common goal of making opportunities equal for all Pakistani citizens, irrespective of where they live. It means provincial divide will be irrelevant in this regard.

All the provincial finance commissions will be encouraged to base their future awards on need-based systems to remove intra-provincial disparities. The policy talks about a policy to maximise the pro-poor impact of the Public Sector Development Programme (PSDP) resources will be held. For every project, efforts will be made to raise private capital so that PSDP resources are only spent on projects that serve as an equalizer and for this purpose, a policy will be developed to set the order of priority of the projects at the Planning Commission.

A new mandatory section in the PC1 Performa to screen every PC1 for its impact on poverty and equality will be introduced and a committee will review the bottlenecks in the system for vulnerable. And there will be a new policy to guide the use of development expenditures by parliamentarians to promote transparency, independent oversight and accountability besides guidelines on conflict of interest for state and government functionaries.

As regards to safety nets, development of the new 2019 National Socioeconomic Registry (NSR) is envisaged, punctuated with multiple validations of the NSR through follow-up review surveys and use of big data analytics to correctly and precisely identify the real poor; conversion of NSR into a live registry while two new social protection programmes are being introduced-Kifalat and Tahafuz-These will be executed through the agency, BISP. Kifalat programme will ensure financial and digital inclusion of around 6 million women through the one woman one bank account policy with inflation-adjustment in the size of the cash. Transfer to 6 million women.

Under Tahafuz, a shock-oriented precision safety net will be launched for the vulnerable to protect them against shocks and this will be involving one-time financial assistance to protect against catastrophic events; assistance to poor widows, who don’t have earning children through Tahafuz and a partnership with NGOs to upscale successful programmes for orphans, street children, seasonal migrants, transgender, victims of child and bonded labour and daily wage workers.

Under the housing for poor programme, there is a plan, namely Ehsaas homes for 10,000 orphans and panah-gahs in several major cities and a housing scheme for the landless farmers through interest-free loans, besides insaf insurance card in 38 districts for 3.3 million people.

To deal with malnutrition, a new community and health and nutrition initiative will be launched to address stunting in children: provision of de-worming drugs, iron, folic acid, micro nutrient supplements through government hospitals.

The pro-poor education initiatives include increase in the budget of the National Education Foundation to enable implementation of contracting out and voucher schemes. There are a number of initiatives for health, which include the universal health coverage and accelerate reform of public hospitals.

The programme aims at accelerated foreign policy drive to review job opportunities in neighbouring countries and other emerging opportunities in countries like Japan and Germany and introduction of a slab for remitters of up to dollars 100 with half of the existing fee and incentives for the remittances to be socially invested.

For poor farmers, labour expert group to study application of labour laws to tenant farmers and to make recommendations for formalising tenancy farming system, a policy to help farmers with fragmented and small land holdings, effective husbandry and hay silage making and a policy to provide market stimulus for livestock and fisheries in arid zones.