Plant for Pakistan Day to be marked tomorrow 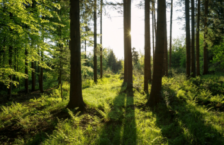 LAHORE: Provincial Minister for Forestry, Wildlife and Fisheries Muhammad Sibtain Khan has said ‘Plant for Pakistan Day’ will be marked on Saturday (tomorrow).

He also directed the forest department to organise comprehensive plantation drives across the province.

On February 9, tree plantation event will be organised by the forest department in all the divisional headquarters. As many 2,000 saplings will be planted in each city including Lahore, Gujranwala, Faisalabad, Rawalpindi, Sargodha, Sahiwal, Multan, Bahawalpur and Dera Ghazi Khan while tree plantation event will be held in 36 divisions and 72,000 saplings will be planted.

In the second phase of Plant for Pakistan Day, 600,000 more saplings will be planted following the earlier pattern. A comprehensive plan has been devised in the meeting held in the office of the forest department.

While chairing the meeting, the minister said the Plant for Pakistan Day will be celebrated zealously. “The programme of tree plantation has turned into a drive to bring the green revolution,” he said. Sibtain maintained that tree plantation was the key to cope up with the climate and environmental pollution.

“The day is not far off when Pakistan will become a green country,” the minister said. He warned that no negligence would be tolerated in this regard and all the officers and officials would mutually complete their tasks.