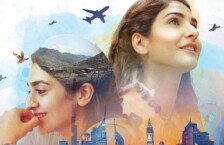 Hajra Yamin, the film’s leading star, took Instagram to share the news with her fans as she also posted a picture of the award on social media.

The film highlights the intersection of two women from two different social classes with Pinky being a young woman from a small village in Punjab who gets a maid’s job in Dubai, while Mehr is a Dubai – based writer / socialist struggling with life and its complexities. The film was screened on April 6 at the festival. For more than 19 years, the UK Asian Film Festival, formerly known as the London Asian Film Festival, has been celebrating and rewarding great South Asian films, filmmakers and artists.