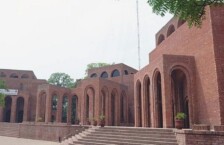 LAHORE: The Punjab Institute of Language, Art and Culture (Pilac) is going to start three mega projects, namely a satellite television, a cultural village and a crafts bazaar, to promote Punjabi culture and language.

A meeting, chaired by Secretary Information and Culture Raja Jahangir, was held at Pilac some days ago for finalising the details of these projects, sources said.

They added that all three projects were initiatives of secretary culture.

It is also learnt that in the near future, Pilac is also planning to form a dance ensemble for cultural dances of Punjab for which the dancers would be hired on monthly wages to perform at different functions and during the visits of dignitaries.

Talking about the projects, Pilac Director General Dr Sughra Sadaf said the new projects would be instrumental in promoting the rich culture and heritage of Punjab.

She added the culture of Punjab would be portrayed through the transmission of the Punjab Rung Satellite Television and the artists, artisans, folk musicians, traditions, cultural norms, customs, local games, literature, folklore and Sufism would be projected through it.

She said the proposed TV channel would be the first one in the culture sector to be launched under the government and it would be set up at Pilac under the auspices of the Information and Culture Department Punjab.

The existing available space at Pilac would be used to set up the studios; however, the space for offices of allied staff would be required while the television licence matter was in process, she added.

According to sources, preservation of village life and culture of Punjab would be the principal objectives of the projects and sufficient space was available at Pilac to develop a village scene.

The village would consist of mud houses, courtyards, a cooking area, pottery, a Persian wheel and other village scenes. Proper designing and placement of village scenes would be carried out. The artisans would be selected to make dioramas and lasting material would be used to make them.

The Punjab crafts bazaar would be used to promote the culture of the province. Under the project, about eight shops would be built at the boundary wall between Pilac and Alhamra Cultural Complex near Gaddafi Stadium.

The shops would sell handicrafts, pottery, cultural dresses, cloth, antiques, ornaments, woodworks, musical instruments and cuisine. The bazaar would also be a source of revenue generation as well.