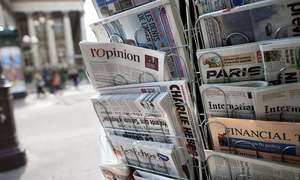 ISLAMABAD: The Press Information Department (PID) has removed 250 ‘dummy’ newspapers and periodicals from its central media list (CML), and plans to get rid of another 730 fake publications over January, according to a senior official from the information ministry.

Following the purge, the number of periodicals on the CML will decrease from around 2,000 to just over 1,000. The list includes daily, weekly and monthly magazines.

Following an audit from the Audit Bureau of Circulation (ABC), the names of periodicals are added to the CML, which is a prerequisite for getting state advertisement.

This ‘operation cleanup’ began in January this year, when PID asked over 1,200 newspapers to get an audit of their circulation and threatened them with the removal of their names from the CML.

Only a handful of publications allowed PID’s ABC wing to conduct fresh audits following the PID notice. Those who refused were removed from the list, the ministry official said.

Sources in PID said that the publications had been on the CML for the last several years despite being ‘dummy’ publications, and had been receiving government advertisement.

Most of the newspapers were receiving state advertisements because of the 25pc quota reserved for regional newspapers. This policy was introduced by former dictator Gen Ziaul Haq.

According to the policy, it is at PID’s discretion to add the publication of its choice to get advertisements out of the regional quota whenever a government entity moves to advertise in national newspapers.

According to a former advertisement director at PID, the policy was designed to provide financial support to small scale regional newspapers.

However, it has led to the mushrooming of ‘dummy’ newspapers which have been brought to the CML and were given government advertisements.

A staffer at a regional newspaper told Dawn that PID officials demand around 50pc of the total amount of an advertisement that they approve for publication in a certain periodicals.

A cheque for the amount is handed to them by an agent of the publication when the advertisement is issued, he said, and added that agents of these ‘dummy’, barely four-page publications, pose as bureau chiefs.

He explained most of these newspapers are printed on a day when the advertisement is supposed to be published.

An official from the media department of a public sector organisation said that ‘dummy’ newspapers use multiple strategies to get government advertisements, including bribes and through links to the ministers concerned or to senior officials at the ministries concerned.

He said the recent purge would not only deprive ‘dummy’ publications of their regular source of income, but would also cut off the unofficial ‘privilege’ of corrupt PID officials.

Though the PID’s ABC wing is going to take a number of such publications off the CML, it has not indicated that legal action will be taken against those officials who issued advertisements to such publications.

When contacted, ABC wing director general Mian Jahangir Iqbal confirmed that about 250 ‘dummy’ newspapers have been removed from the CML, and that the department was going to clean up the list further. He said certain changes are also being incorporated into the rules to toughen the CML enlistment mechanism.

Mr Iqbal said that he could not comment on the accountability of ‘corrupt’ PID officials as it was not under his mandate.