RAWALPINDI: To mark Kashmir Day, two exhibitions, one at Rawalpindi Arts Council (RAC) and the other at Pakistan National Council of the Arts (PNCA) were held on Monday.

The RAC organised a three-day photograph exhibition in connection with Kashmir Solidarity Day to express solidarity with the people of occupied Kashmir.

Zamurd Khan, Managing Director Pakistan Baitul Mal, along with Naheed Manzoor and Waqar Ahmed Resident Director RAC inaugurated the exhibition. The function was attended by a large number of people.

More than 150 photographs of atrocities inflicted on the people of Indian administered Kashmir by the Indian armed forces were on display. The photographs displayed at the exhibition presented a firsthand account of brutalities suffered by the people of occupied Kashmir, at the hands of the Indian forces.

Speaking on the occasion, Zamurd Khan said that the government and people of Pakistan will continue providing moral and diplomatic support to the people of occupied Kashmir till they get their right to self-determination.

He urged the international community to resolve the issue of the occupied Kashmir because the credibility of the United Nations was marred by ignoring the Kashmir issue. Mr Khan applauded RAC for observing Kashmir Solidarity Day enthusiastically.

“We renew our pledge every year on Kashmir Solidarity Day to support the Kashmir cause,” Naheed Manzoor said. She said that Kashmir is the jugular vein of Pakistan and the people of Pakistan cannot rest content till their Kashmiri brethren were liberated.
Apart from the photographic exhibition, Kashmiri art pieces, comprising Kashmiri shawls and embroidery, prepared by Kashmiri artisans Zulfiqar Ghazi and Rubina Zulfiqar were put on display.

In connection with Kashmir Solidarity Day, tableau and Kashmiri songs competition will take place amongst school students on Tuesday (Today).

The event was organised by Ministry of National Heritage and Integration and was attended by students of twin cities. Students presented skits, tableau, speeches, Kashmiri songs and dance. PNCA also arranged a puppet show highlighting the issue.

The performance reflected the sufferings, miseries and agonies of the Kashmiri people. Students paid tribute to the martyrs of Kashmir, who sacrificed their lives for self-determination and independence. Chief Guest Mrs Midat Shahzad, Joint Secretary Kashmir Affairs and Gilgit-Baltistan, while talking to participants said that she was impressed by the performance of students.

At the end of the programme, the chief guest awarded prizes and certificates to the participants. PNCA will hold a puppet show in Lok Virsa, on Tuesday, to show solidarity with the people of Kashmir. 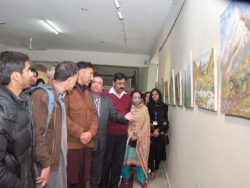 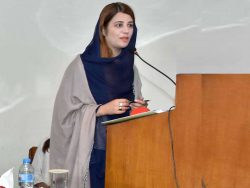