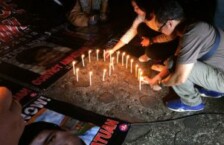 The Pakistan Press Foundation, an independent media organization that seeks to promote and defend freedom of expression, expressed “deep concern” on the killing of Philippine radio announcer Gabriel Alburo in a letter to President Rodrigo Duterte, dated 31 December 2018.

Alburo was on his way home to Guihulngan City in La Libertad, Negros Oriental — located in the Visayas, one of three geographical divisions of the Philippines — when he was shot by two men riding a motorcycle around 3:05 a.m. on December 28, 2018, according to the National Union of Journalists of the Philippines (NUJP).

PPF Secretary General Owais Aslam Ali “has condemned the murder of Gabriel Alburo and called on the authorities to immediately and independently investigate the killing of radio announcer and hold those responsible for his murder.”

Alburo recently resumed broadcasting over community radio station 94.5 dyJL FM in Guihulgan and was running for councilor as an independent, NUJP reported.

Alburo’s killing is the 13th recorded under the Duterte administration since he took office in 2016.

Other cases of journalist killings in 2018:

In 2018, the Philippines ranked 133 out of 180 countries on the World Press Freedom Index of Reporters Without Borders. Aside from journalist killings, constant intimidation and harassment, notably by the Duterte administration, are among the other challenges confronting  the Philippine press. This has been demonstrated by the multiple tax evasion cases lodged against online news website Rappler and its CEO Maria Ressa.

A composite report produced by the Freedom for Media, Freedom for All Network, which is composed of Philippine-based organizations Center for Media Freedom and Responsibility, NUJP, Philippine Press Institute, MindaNews, and Philippine Center for Investigative Journalism, shows that in the first 28 months of the Duterte presidency, between 1 July 2016 and 31  October 2018, there were 99 recorded cases of attacks and threats against the Philippine press.

Last year the Philippines, ranked fifth, also made the annual Global Impunity Index of the New York-based Committee to Protect Journalists, with 40 unresolved cases of journalist murders as of August 2018.

To date the killing of 32 journalists and media workers during the gruesome Ampatuan massacre — which claimed a total of 58 victims — in Ampatuan town, Maguindanao, on 23 November 2009 remain unresolved.