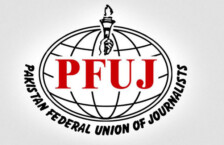 ISLAMABAD: Pakistan Federal Union of Journalists (PFUJ) has out rightly rejected the representation in the Press Council of Pakistan (PCP) as well as amendments made by Senate Standing Committee on Information and Broadcasting for changing criteria for the appointment of PCP chairman.

“We totally reject the changes made in the rules which are aimed at bringing yes men in the PCP,” a joint statement issued by PFUJ President Shahzada Zulfiqar and Secretary General Nasir Zaidi said Thursday.

The two leaders pointed out that PFUJ, which is the sole representative body of journalists’ unions across the country, had been representing their community at the PCP for the last nine years. It said to make this body ineffective and to include yes men in this organization, changes have been made which would allow the government to nominate any four persons from the so-called professional bodies of journalists. “This is apparently an attempt to divide and deprive the journalist community of their true representatives from the PCP,” the statement said.

The PFUJ elected leaders while rejecting the announcement of representation in PCP said PFUJ had earlier conveyed its concern and rejected this proposal by sending its written protest to ministry of information and broadcasting a few months ago.

On the issue of appointment of chairman of the Council, the PFUJ contended that Press Council of Pakistan had always been headed by a retired high court judge or a lawyer. “The new ill-conceived amendment in the rules is aimed at bringing a person of government’s choice to encourage favoritism, the PFUJ said, adding “being sole elected representatives of the journalist community across the country we totally reject the amendments made in the Press Council of Pakistan Bill 2020”. The statement urged the government to withdraw these amendments.

PFUJ said the amendment is an attempt to divide and rule and further damage the media industry and to install PCP chairman by eroding merit and transparency which seems to be the policy of the PTI-led government.