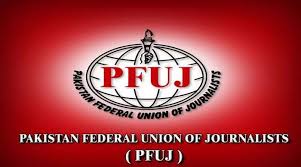 ISLAMABAD/MULTAN: Speakers in protest rallies of Pakistan Federal Union of Journalists (PFUJ) across the country warned the government with the message of “Enough is enough, no more retrenchments, censorship and media gagging in Pakistan”, says a press release on Wednesday.

The PFUJ, with the support of all journalist unions, arranged protest rallies across the country, attended by journalists, media workers, retrenched employees and pensioners of national TV and radio, besides workers and trade unions the workers of OGDCL, SNGPL, and CDA also joined the protest to give support to working classes of media industry.

A protest rally marched towards the parliament from the National Press Club, however, the rally was stopped by a huge contingent of police at the D Chowk, where the roads was blocked with barbed wires and blocks.

While addressing the protest rally in Quetta, President PFUJ Shahzada Zulfiqar criticized the government for creating a mess in the functions of media industry, through misuse of Pemra laws, which seems to be by design, only to gag the media. “Tactics adopted by government is destroying the basic fabric of the society instead of resolving issues in the country,” he said.

Secretary General PFUJ Nasir Zaidi, in his address to protest rally in Islamabad, said the entire media community is united for ensuring free press and protection of the rights of journalist community. “We will not disappoint the working classes and ready for any sacrifices needed for achieving our goals of safeguarding the rights of worker and laborers, “he said. He warned the government to stop pressurizing the media owners on forced retrenchments and through government advertisement and dictation and imposing censorship on media.

It was said during the protest that the protest rally is an ample proof of government highhandedness against the media industry and strict censorship on the media as the operation of channel-24 is suspended for the last 72 days. “National TV and radio are not being spared from retrenchments, forced retirements and denial of dues to pensioners and they are on roads for their rights” he said.

Anchor and representative of HRCP Muneze Jahangir said today all the working classes are united for their rights and any attempt to thwart this unity will be foiled, she warned. Noted anchor and senior journalist Hamid Mir also spoke on the occasion. Former president of PFUJ Afzal Butt, while criticizing the government for increasing unemployment and price hike, said the media industry and journalist community are being targeted which is a dangerous trend adopted by PTI government.

President National Press Club Shakil Anjum, while warning the PTI government, said, “Enough is enough and the struggle for saving media industry will continue till last and there will be no compromise”.

Malik Ayub Khan of National Party announced his party’s all out support for workers of media industry and said issues will be raised in the Parliament by its elected representatives.

President RIUJ Amir Sajjad Syed and Secretary Asif Ali Bhatti in their speeches said, “it’s an irony that services of contract staff of national radio were not only terminated but and an FIR was registered and they sent behind the bar for demanding restoration of the services.

Senior Journalist Fauzia Shahid and Mubarak Zeb demanded for implementation of 8th Wage Board Award and there will be no compromise on freedom of press and media.

Representative of national TV pensioners Muhammad Ashraf and Shahid Hashmi said the management of state broadcaster and the government are denying payment of retirement dues but spending millions on illegal hiring and now expensive and costly assets of national TV being offered for sale on peanuts price which needs to be stopped.

Our correspondent adds from Multan: Activists of Multan Union of Journalists Wednesday staged a demonstration in front of Multan Press Club and demanded release of wage award to journalists with arrears.

Senior politician Javed Hashmi joined the protest and he expressed solidarity with journalists. The Pakistan Federal Union of Journalists (PFUJ) made a countrywide appeal for November 11 for the implementation upon wage award.

Speaking on the occasion Javed Hashmi said the journalists were passing through a very critical financial situation. He criticized the government for squeezing media freedom, imposing unannounced censorship in term of suspending payments to media houses. He said the government policy has brought adverse effects in the media and print industry.

He said the government censorship has suffered the workers greatly into critical financial disorder. He said the arrest of Jang Group Editor-in-Chief Mir Shakil-ur-Rahman was part of that government adventurism. He said press freedom in the country has been at stake due to the government policies.

Javed Hashmi demanded the government to release payments of media houses so they would release salaries of workers. The MUJ office bearers including Rauf Maan, Shahadat Hussein, Shafqat Butha, Rana Pervez Hamid, Nadeem Shah and others were present on the occasion.