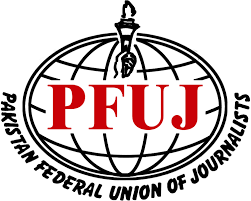 ISLAMABAD: Pakistan Federal Union of Journalists said that November 3, 2007 was the blackest day in the history of Pakistan as Gen Pervez Musharraf imposed emergency and banned media with suspension of transmissions of TV channels.

In a joint statement PFUJ President Shahzada Zulfiqar and Secretary General Nasir Zaidi said that Nov 3 2007 will always be remembered as a black day because judges of the Supreme Court were put under house arrest, and many were asked to take oath under provisional constitution order as the Constitution was abrogated.

Journalists have been at the forefront in such situations while standing up against dictators; they resisted and launched protests against illegal and unconstitutional steps taken by Gen Musharraf, arranged and conducted talk shows on the street. Journalists throughout Pakistan protested on this day and demanded withdrawal of emergency, provisional constitutional order and restoration of the 1973 Constitution.

Today media is facing authoritarian tactics again and the entire industry is a victim of policies adopted by the government on the behest of undemocratic and anti-media forces, they said, adding the editor-in-chief of one of the largest media houses, Mir Shakeel ur Rehman has been behind bars for the last 8 months without formal registration of a case which is illegal and unconstitutional.—PR