PFUJ book on its odyssey of seven decades ready 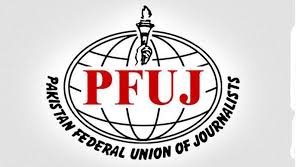 ISLAMABAD: The Pakistan Federal Union of Journalists (PFUJ) book about its eventful odyssey of seven decades is now ready and will be launched soon. The book, titled “From Layoffs to Lashes: PFUJ’s 70-year Fight for Media Freedom” has been compiled to mark 70th anniversary of the PFUJ establishment.

The PFUJ can justifiably claim that it’s unlike any other association of professionals in Pakistan; that’s why no other body can even think of matching what the PFUJ has managed to achieve since its inception in 1950.

It took on three military rulers (Generals Ayub Khan, Ziaul Haq and Pervez Musharraf) and lived to tell its tales of defiance long after the dictators had met their fate; and it worked tirelessly for the cause of freedom of the media and that of expression throughout its long journey.

According to a press release issued by PFUJ President Shahzada Zulfiqar and Secretary General Nasir Zaidi, the book is one of revelations as it serves to document several eye-opening events in the PFUJ’s long journey for press freedom and freedom of expression.

Comprising over 50 chapters, more than 20 of them in English, the book that’s spread over 500 pages not just chronicles the sacrifices rendered by journalists for the cause of press freedom in the 1970s but also brings on record the strong-arm tactics employed by the establishment to silence independent-minded journalists last year.

It has been compiled and formulated under a PFUJ project led by senior journalist Mazhar Abbas. Its English chapters have been edited by Nizamuddin Siddiqui and Urdu chapters by Waris Raza.

The book, printed by the Karachi Union of Journalists, has chapters on the torchbearers of PFUJ’s campaigns like M.A.Shakoor, Asrar Ahmed, Minhaj Barna and Nisar Osmani. It also highlights the national union’s efforts for improving the working and economic conditions of journalists, according to a handout.

It said that notable among the campaigns launched by the PFUJ were those of 1970, 1978 and 2007, during which journalists called strikes, held rallies and demonstrations and even courted arrests. As a result, they were incarcerated and even flogged on the orders of military courts.

On other occasions, many of them were sacked by the managements of their organizations. In short, they suffered physical hardships as well as economic deprivations. “The PFUJ played a leading role in defending freedom of expression, economic rights of workers as well as civil liberties throughout the 70 years of its existence,” the handout said, adding that the PFUJ would continue to play its role in mitigating the problems being faced by journalists and striving for press freedom.