Petition against use of plastic bags heard 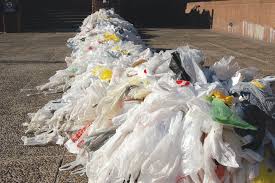 Lahore   (PR)   The Petition on Plastic Pollution titled Syed Shahmeer Raza etc vs Federation of Pakistan etc.’ was taken up by a bench of Lahore High court.

Advocate General and Chief Secretary Punjab made appearance on behalf of the Punjab Government. They apprised the court on the legislation being prepared in this regard, pertaining specifically to the issue of’ polythene bags, He further stated that Prime Minister Imran Khan has issued instructions to the provinces to take immediate measures to curb the menacc as health of the public at large is involved and the government is taking this issue very seriously.

Appearance on behalf of the petitioners was ensured by Advocates Muhammad Zafar Iqhal and Osama Zafar. They contended that the issue should be dealt with at a larger canvas, which requires legislation banning single use plastics in totality.