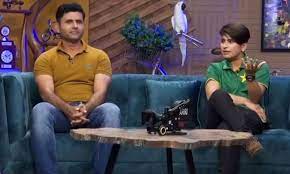 In a video clip from the programme broadcast on June 6, Razzaq was commenting on Dar’s appearance, strongly implying that the latter looked more like a man than a woman. The clip had caught the attention and ire of social media, according to Dawn.com.

According to the Pemra order, the complaint stated that the female host on the show also “degrades and shames the career adopted by female cricketers, expressly stating that female cricketers mostly leave cricket when they get married”.

The Council of Complaints observed that the comment on women leaving cricket after marriage was a “generalisation” that “leads to blatant discrimination against female gender”. Referring to the comments made by Razzaq, the council said the cricketer was “implying a presupposed notion that cricket is a sport only meant for boys who define the masculine nature of the sport”.

The order also made a reference to the female host asking Nida Dar whether a cricket player could sport long hair. “The female host is insinuating that short hair is too masculine and that women cricketers are somewhat an anomaly,” it said.

Referring to another comment by host and actor by Nauman Ijaz who asked why athletes didn’t play the sport donning a three-piece suit, the council termed the remark “very problematic, deep rooted [in] misogyny and prejudice and contempt”.

“This attitude demonstrates how widely accepted the belief is that men are more entitled to behave misogynistically than women are entitled not to be treated hatefully,” it said, adding that women deserved to be treated with respect and attacks motivated by gender were to be taken seriously.

The respondent’s counsel, Amina Ali, maintained that the remarks made during the show were “general in nature” and had been “misconstrued” by the petitioner to malign the reputation of the channel in question.

The respondent further submitted that the programme was “comic in nature” and “it is vital to understand that standard of humour or comedy includes more than often puns, playing on words and witty quips”.

Amina Ali said that hosts on the show were in “awe and admiration” of Nida Dar and were seen “encouraging and supporting her”. She maintained that comments of the host(s) were taken out of context, misrepresented and misconstrued.

The council, however, concluded that the comments made against Nida Dar were “insensitive, demeaning, derogatory and hateful”, and in violation of Pemra laws. It recommended that a fine of Rs500, 000 be imposed on Neo News and the channel be directed to issue an unconditional apology to the complainant and women as a whole and refrain from giving airtime to guest speakers with a history of making insensitive remarks towards women. It also called for directing all satellite channels to be “careful while airing content regarding women”.

Pemra approved all the recommendations, except the fine amount of Rs500, 000, and instead imposed a fine of Rs200, 000 on Neo News.