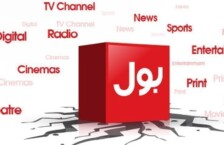 The council of complaints (CoC) at Pakistan Electronic Media Regulatory Authority (PEMRA) on Friday issued a Rs300,000 fine on Labaik Pvt Limited after finding it guilty of violating Section 20 of the PEMRA Ordinance 2002.

“The CoC heard the case two times but [Labaik Pvt Limited] does not appear to take the case seriously,” said an internal letter seen by Profit from Ashfaq Ahmed Jumani, secretary to the CoC Sindh. “CoC is of the view that Bol News Network has stated/aired unjustified and defamatory campaign through its program ‘Ab Pata Chala’ against complainants Raihan Ali Merchant, Ahsen Idris and their companies.”

In his letter, Jumani said that CoC members observed that the Bol New Network levelled serious charges against the complainants and their companies without offering any evidence to back up the allegations being made during the programme. He added that the representative from Bol News Network – Azhar Shamim – failed to defend or offer a satisfactory reply to the CoC in contents of complaints.

The CoC, the letter states, concluded that Bol News Network violated the established principles of reporting and journalism.

In response, all three media executives filed lawsuits against Labaik Pvt Limited, the parent company of a diploma mill and BOL TV, suing the TV channel for a collective $16 million for violation of Section 22 (1) of the Electronic Media (Programmes and Advertisements) Code of Conduct, 2015.

Sources told Profit that BOL TV aired the alleged hit pieces after years of failing to secure advertising business from GroupM, Z2C, and Blitz Advertising, with the agencies unwilling to do so due to the strained relationship between BOL TV and both Pakistan Electronic Media Regulatory Authority (PEMRA) and Pakistan Broadcasters Association (PBA).

Shortly after the lawsuits were filed with the Sindh High Court, Merchant and Idris filed complaints with PEMRA, alleging that Bol News Network aired frivolous and fabricated content due to the low volume of business granted by the agencies they own to the channel. According to PEMRA, the Pakistan Broadcasters Association (PBA), lodged a complaint against Labaik Pvt Limited on the 30th of July 2020 for airing a campaign that defamed PBA and three media buying agencies: GroupM, Z2C, and Blitz Advertising.

On the 11th of August 2020, the CEO of Labaik Pvt Limited received a restraining order from Muhammad Tahir, the general manager of PEMRA, stating that Bol News is prohibited from broadcasting or re-broadcasting any content containing false, fictional, or fabricated allegations against the aforementioned media agencies or the PBA.