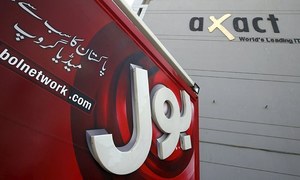 ISLAMABAD: The Senate Standing Committee on Information and Broadcasting on Tuesday took up the issue of BOL TV, which was not allowed to start its transmission last year, and directed the Pakistan Electronic Media Regulatory Authority (Pemra) chairman to become a party in the case.

A representative of BOL, Faisal Aziz Khan, informed the committee at a meeting presided over by Senator Kamil Ali Agha that the Ministry of Interior had issued the licence for the channel and then suspended it.

“Because of the decision, thousands of employees lost their jobs and have been running from pillar to post to get their rights.” Mr Khan said. Pemra chairman Absar Alam said the incident took place before his appointment in November 2015.

“I have been only informed that the licence for the BOL TV was fake. I have twice written letters to the government seeking information but no reply has been sent to me,” he said.

Senator Farhatullah Babar wondered how it was possible for the ministry to issue a licence for the channel and then withdraw it.

Senator Saeed Ghani also expressed concerns over the matter and said why the licence was suddenly suspended.Chairman Kamil Ali Agha directed the Pemra chairman to become a party in the case to ensure justice for the employees.

The Pemra chief assured the committee that he would look into the matter and would submit a report to the committee at its next meeting. It may be noted that the employees of BOL TV have not been paid their salaries for 10 months.

The committee directed the managing director of Pakistan Television (PTV) to improve reporting and ensure impartiality in the coverage of parliament sessions.

The committee was discussing a point of order raised by Mohammad Usman Khan Kakar during the Senate session on January 15 regarding the coverage of the upper house by the state-run channel.

Mr Kakar had alleged that PTV only covered statements of the treasury benches and did not give coverage to other members, which was discrimination. The matter was referred to the standing committee for consideration and report.

The PTV managing director, Mohammad Malick, said it was not correct that the opposition was not given a proper coverage.

“We cover proceedings of parliament live on PTV National; however, we also telecast the policy statements of ministers and replies of the opposition leader on PTV News,” he said.

“We cannot give all the time of PTV News to cover parliament proceedings. Parliament can run its own channel and PTV is ready to support it in establishing such a channel,” he said. The chairman said the committee had never asked for full time on PTV News for parliament.

“We are just saying that whatever time PTV gives to the parliament proceedings, there should be no discrimination. The chairman Senate has also reservations over the coverage by PTV.” He said there was also a need to improve the PTV reporting. It should also be ensured that there is no partiality in coverage, Mr Agha said.

Senator Farhatullah Babar said policy statements by ministers were shown on PTV News but when the opposition replied to the statements, they were not covered by PTV.

“It is our right to be covered. The chairman Senate has directed to stop the coverage of ministers’ statements without his approval because only ministers are being covered on PTV News,” he said.

Mr Kakar said even on PTV National, the opposition members were given coverage after midnight. It may be noted that on January 25, a similar issue was raised in the Senate standing committee on rules of procedure and privileges. Mr Malick adopted a similar stance and made the members speechless. The members then started praising Mr Malick and his policies but on Tuesday the situation was totally different for the PTV boss.