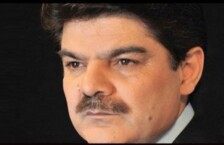 ISLAMABAD: In compliance with an order of the Lahore High Court (LHC), the Pakistan Electronic Media Regulatory Authority (Pemra) banned on Sunday ARY News anchor Mubashir Lucman and his programme ‘Khara Such’ till further orders of the court.

The ban will also apply on his appearance in any other TV programme in any capacity.

“We just obeyed the orders of LHC and the ban will remain in force till hearing of the case on Nov 11 when the detailed judgment will be issued,” Pemra spokesman Fakhar Mughal told Dawn.

He said the management of the channel had been informed that in case of non-compliance the authority would be constrained to initiate appropriate action which might lead to cancellation of its licence and imposition of fine under the Pemra laws.

A press release issued by Pemra said: “It is directed to ensure with immediate effect that Mubashir Lucman does not participate in any programme on ARY News or on any other TV channel being aired in Pakistan either as a host or as an observer or as a participant.”

It said the court orders had been circulated to all news and current affairs TV channels to ensure compliance.

On Friday, the LHC issued bailable arrest warrants of ARY News chief executive officer Salman Iqbal, Mubashir Lucman, the programme’s producer and one Asim Malik for not appearing before the court despite having been summoned.

The court placed restrictions on airing of the show and participation of the anchor in any other TV programme.

Justice Syed Mazahar Ali Akbar Naqvi issued the orders while hearing a suo motu notice against the respondents for airing an interview of Asim Malik, owner of a firm, Future Concern, in which serious allegations had been levelled against him.