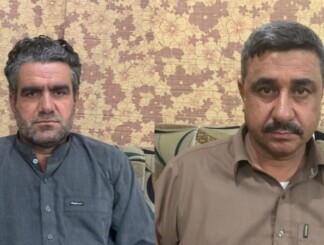 Two journalists based in the border city of Chaman, between Pakistan and Afghanistan, in Balochistan province were arrested on 20th June and brutally beaten by security personnel because of their coverage of poor conditions in the local coronavirus quarantine centre.

The two journalists – Saeed Ali Achakzai, of Samaa News TV and Mateen Achakzai of Khyber News TV television channels – were arrested by district administration under the Maintenance of Public Order Act and shifted to the jail.

Speaking to Pakistan Press Foundation (PPF), Saeed said that they were reporting on the lack of basic facilities at a quarantine center in Chaman. He said they were arrested without a First Information Report (criminal complaint) or an arrest warrant. Saeed said that while transferring them to the jail, they were beaten by three police officials and added that they were also tortured while in custody.

In the joint statement PFUJ President Shahzada Zulfiqar and Secretary General Nasir Zaidi had demanded a judicial inquiry into the incident and the immediate suspension and arrest of those who had tortured the journalists.   Speaking to PPF, BUJ President Ayub Tareen strongly condemned the incident and stated that an application had been forwarded to the provincial government for an inquiry into the arrest and torture of journalists.

On June 23, authorities launched an investigation into the incident and Balochistan Home Minister Zia Langove referred to it as the “brutal incident”. Langove had also said that three officials who were directly involved in the incident had been suspended and the case against the two journalists had been dropped.