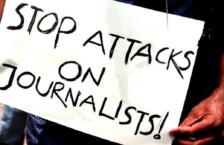 Pakistan Press Foundation (PPF) calls on the relevant authorities to investigate the physical assault of three journalists in the Mirpur Mathelo city in Ghotki district of the Sindh province. We call upon the officials to register a first information report (FIR) and initiate legal proceedings into the incident.

Following the attack, the journalists were shifted to DHQ Hospital Mirpur Mathelo for medical assistance.

A sit-in was staged by journalists in front of the office of the senior superintendent of police in support of the journalists who came under attack. SSP Ghotki Umar Tufail negotiated with the protesters and arrested the policeman who allegedly tortured the journalists.

On May 31, Barkat Mirani told PPF that three three journalists including himself went to Baraf Kharkhana Road to cover private torture cells made by police, where police were said to imprison accused and beat them. Mirani said that when they were done with their coverage, police constables suddenly arrived and started beating them. Their mobile phones were taken and videos that they had recorded were also deleted.

Mirani said that he was left behind while the other two journalists were taken by the police. He said that Latif Veesra was beaten badly after which he was left at

They left me and took my companion journalist Latif Veesar and his cameraman Khalid Veesar with them. They beat Latif Veesar badly and after beating him they left him on Mirpur Mathelo National Shahrah, a road, from where the journalists took him to hospital.

He said that while DIG Fida Mastoi had suspended the constables involved in the incident and asked SHO Khalid Memon to report to the Central Police Office in Karachi, the police were not filing a criminal complaint.

“I am still protesting outside the SP office to get justice and for a fair inquiry into the case because police are not filing our FIR,” said Latif Veesar.

Razzak on May 31 said that police had said they needed another day to investigate the incident.

Mirpur Mathelo Press Club President Saqib Gadhani and Sukkur Press Club General Secretary Sahil Jogi told PPF that the journalists were on the line of duty when they were attacked by police as they were covering the illegal and private torture cell made by Mirpur Mathelo Police.

“SSP Umer Tufail said that we can’t file an FIR, that’s why we are protesting outside the SSP office,” Gadhani added.