PPF Secretary General Owais Aslam Ali in his letter said attempts to pursue coordinated legal proceedings against The Daily Star’s editor and publisher MahfuzAnam was a clear attempt to intimidate media and muzzle press freedom in Bangladesh. It clearly indicates an aggressive and politically motivated effort to harass a senior editor and a key newspaper.

He urged Bangladesh government to ensure Anam a full, judicial trial and that legal system is not used by some groups to harass journalists and media.

At least three dozen cases, including six seditious pleas and a dozen defamation cases were filed in 17 districts by individuals and political groups against Anam after he admitted in TV interview on 3 February 2016 to a lapse in editorial judgment in publishing reports based on information supplied by task force intelligence cell during caretaker government almost a decade ago without being able to independently verify them. 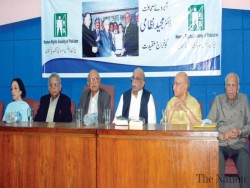