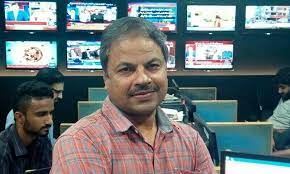 Pakistan Press Foundation (PPF) welcomes the safe return of Aaj News Assignment Editor Nafees Naeem, a day after he was abducted by unidentified individuals in plain clothes. The circumstances of his abduction and return remain unclear. We urge the authorities to conduct an investigation and to provide clarity on Naeem’s case including why he was picked up and by whom. On June 13, Naeem was picked up by plainclothes men from near his house.

In a statement, Aaj News had condemned the abduction and added that if Naeem had done something unlawful, it should have been dealt with through the appropriate legal means.

The TV channel’s management said that no institution can be given the right to pick up a citizen without any allegation, First Information Report (FIR) or complaint. They demanded Prime Minister Shehbaz Sharif, Interior Minister Rana Sanaulllah and Sindh Chief Minister Murad Ali Shah to take notice of the incident and urged the government to ensure Naeem’s recovery.

CCTV footage shows Naeem being ushered into a vehicle by three men. As per Geo, a criminal complaint (FIR) was registered at the Gulbahar Police Station on his brother’s complaint.

Following Naeem’s abduction, Interior Minister Rana Sanaullah said that he had taken notice of the incident and contacted the provincial inspector general of police to ensure the journalist’s safe recovery. “The federal government will provide every sort of technical assistance to Sindh Police and all the necessary resources will be utilized to ensure his safe return,” he added.

Aaj News Bureau Chief Riffat Saeed told PPF that Naeem was released around 5am after 12 hours, adding that police were denying their involvement in the abduction. Saeed said that it was not yet clear why Naeem had been abducted and could not be clarified till Naeem himself shared details. The journalist’s phone has been switched off and he has not come into office yet.

In a statement, Karachi Union of Journalists President Shahid Iqbal and Secretary General Faheem Siddiqi said that the continuation of such incidents against journalists despite a change in the government, make it evident that all [governments] think and act the same way.

In a statement condemning Naeem’s abduction, Karachi Press Club President Fazil Jamili, Secretary Muhammad Rizwan Bhatti and other office bearers demand that the commission to be formed under the Sindh journalist’s protection law should be formed immediately. “If the commission had been set up, this issue could have been brought before it and the commission could have found a solution to it.”

The Association of Electronic Media Editors and News Directors (AEMEND), the Council of Pakistan Newspaper Editors (CPNE) and the Human Rights Commission of Pakistan (HRCP), Editors for Safety (EfS) also condemned the abduction.