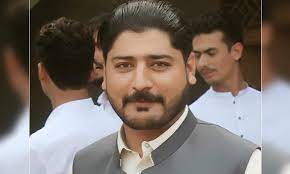 On Nov 8, 2021, Muhammad Zada Agra, Sub-editor of Sada-e-Malakand and Social Activist was shot dead by two unidentified gunmen in front of his house in Sakhakot, Malakand. The attackers managed to escape after committing the crime.

Slain Muhammad Zada Agra, in his writings and commentaries, kept raising the issues of local drug mafia, corruption and lawlessness of local administration in Malakand. He accused the local police and the administration of patronizing drug dealers in the community meeting of the deputy commissioner.

Family and other well-wishers protested the death by blocking the GT Road and demanded the arrest of Deputy Commissioner Malakand Altaf Shaikh.

On Nov 15, 2021 the Malakand police arrested two men for murdering Muhammad Zada.  At a press conference, Malakand Deputy Commissioner Anwarul Haq said that the murder weapon and a motorcycle have been seized from the suspects.  “The men confessed to the crime during preliminary investigations,” he revealed. “They work for a drug mafia. The police have arrested 30 drug dealers from the district. An operation is underway to crackdown against others as well.”

Talking to PPF, Editor Sada-i-Malakand, Gohar Rehman strongly condemn the murder, and called it an act against freedom of expression. Muhammad Zada was a passionate and a brave journalist who raised voice although he knew that he will face its consequences. He received threatening calls from unknown numbers several times but he never stopped writing about the illegal activities in the area especially against the drug and land mafia.

In a recent meeting, Muhammed Sada blamed the District Commissioner Malakand, Altaf Shaikh for the disturbing situation of the area. He received threats after this but he continued to write against all mafias in the newspaper and on his social media account as well.  In his Facebook post on Oct 12, 2021, Muhammed Zada nominated Shaikh for any mishap with him and said Shaikh is trying to harass him.

Senior journalist and former president of Swat Press Club, Shehzad Alam told PPF that Muhammad Zada was very active on Social Media, He used to post about the illegal activities of Malakand on his Facebook account. Recently his speech against Drug smugglers in a meeting went viral, He can be seen as very passionate to solve the problems of the area in the video.

President of Swat Press Club, Muhammad Mehboob also strongly condemn the killing of the journalist and demanded a fair investigation of the case.