Pakistan needs training in safety and security of freelance journalists

Saif ul Islam, President Khyber Union of Journalist said journalists including freelancers have been badly affected because of terrorism in this region. Many parts of the Khyber Pakhtunkhwa (KP) province were declared as war zones, but journalists kept working there. He stressed the importance and need for providing safety trainings to journalists working in conflict areas or in dangerous situations

Islam added that the KP Home Department has formed a committee for the safety of journalists, that includes representatives of unions of journalists and police officials, but it does not meet on regular basis.

He was speaking at the three-day workshop and roundtable discussion organized by Pakistan Press Foundation (PPF) with support of Open Society Foundation (OSF), for freelance journalists of Khyber Pakhtunkhwa who in routinely faces serious safety challenges and threats. The purpose of the workshop was to provide security awareness and training to journalists working in conflict zones of FATA, Khyber Pakhtunkhwa and Azad Kashmir.

During the discussion Khanzada Khan, Vice President of Pakistan Federal Union of Journalists (PFUJ) said freelance journalists should bring their issues to journalists unions as they are there to solve problems of media workers. He said relatively few journalists work as freelancers in Pakistan as compared to other countries and added that Peshawar Press Club accommodates them in its constitution.

Syed Tahir Mehmood who led training workshop said Pakistan is among the most dangerous countries for journalists and these dangers increase manifold for media practitioners working in the conflict zones. 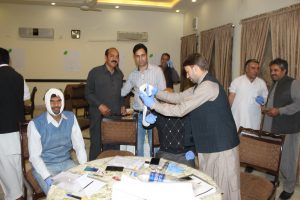 The training included awareness about weapons: improvised explosive devices, landmines, and other weapons. Participants were informed about their range and effects and safety measures to deal with these threats. The workshop provided participants with practical training in First Aid including primary survey, Cardio Pulmonary Resuscitation (CPR) and stopping external bleeding. They also were given insights on PTSD (Post Traumatic Stress Disorder) a psychological trauma.

It is observed that journalists usually rush to cover the news, keeping this in view they were given awareness on security in commuting; in public and private vehicles; and were told about the four steps planning cycle, which could be adopted to reduce threats; it included; identifying assets, threats, risks, and measures to be taken reduce the risks.
The hands-on activity included ‘tree of safer journalism’ to identify elements for safety in the field. It was stressed that journalists should keep in touch with international and local organization, working for their safety and security.