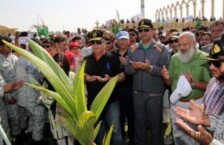 He acknowledged PN efforts in preserving Coastal and Marine ecosystem and urged other government and non government Organizations to follow PN in this prestigious national cause.

In the end, he also planted a sapling at A.K Khan Park and joined the participants in beach cleaning.

Participants of beach cleaning campaign collected garbage & used plastic articles from the beach. Presence of showbiz & sports celebrities in the campaign boosted up morale of the participants.

In order to promote protection of natural environment particularly marine environment, Pakistan Navy has always been on forefront to raise awareness on environmental issues among masses.

PN efforts to clean up the recent oil spillage off the coast of Mubarak village are true manifestation of its resolve to sustain natural quality of life.

The four day long cleaning operation not only helped in saving marine life but also prevented great damage both to the economy and environment. Today’s beach cleaning and tree plantation campaign was the continuation of Pakistan Navy’s resolve for the betterment of environment.