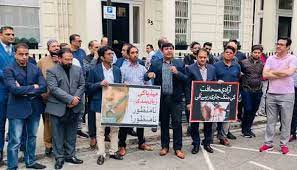 At a huge protest held outside the Pakistan High Commission premises here in solidarity with the journalist community in Pakistan, dozens of journalists gathered for a protest to condemn the dangerous plans being pushed forward by Information Minister Fawad Chaudhary in the shape of Pakistan Media Development Authority (PMDA) ordinance.

The protest was convened by Journalists Joint Action Committee (UK) to show support for Pakistan’s media workers who are in uproar against the current information minister who is determined to go ahead with the controversial law to enforce control of media, bypassing courts and the system.

The speakers said that the ill-conceived and dictatorial PMDA concept has been unanimously rejected by all media and journalists’ bodies as well as the Human Rights Commission of Pakistan, Pakistan Bar council, Supreme Court Bar Association Pakistan, political parties and international media. They said that the government is saying that it will set up tribunals for rights of workers, when such tribunals already exist, but its actual objective is to bypass high courts and create NAB and anti-terrorism like courts to fix journalists and their stories and pressure media houses to control free and objective flow of information.

The journalists said that the government is so hell bent on bringing the new ordinance that through tribunals it will be end the right to appeal against punishments unless the case is taken to the Supreme Court which is costly and already there is a huge backlog of cases and it could take years before a case is heard.

The journalists particularly singled out the current information minister for first playing his role in the economic murder of journalists and now pushing through a black law to completely finish the private media which provides thousands of jobs to media workers.

Journalists said that media tribunals are the most dangerous part of the PMDA because the government will sanction the journalists it doesn’t like and will make it impossible for the objective journalists to operate.

They said that the controversial law is ill conceived and whilst it makes lofty promises its actual objective is only to bring Pakistani media under a draconian body which will be like a ‘state above the state” and which will only exist to abuse its powers to support the sitting government.

Journalists and community leaders called on British Pakistani MPs to break their silence and stand by Pakistani journalist community and support free media in Pakistan. The speakers said that PMDA proposes penalties on media houses and journalists up to Rs250 million and prison sentences up to five years or more and the purpose of these unfair laws is to instill fear in media not to question actions of the government or hold them accountable.

They said this law would penalize only those journalists and media whom the sitting government doesn’t like. Journalists called on the government to scrap the ordinance and focus on strengthening the existing laws and the relevant institutions.