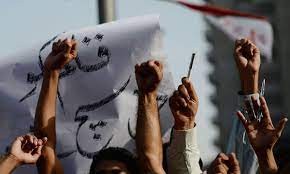 BAHAWALPUR: Pakistan Federal Union of Journalists (PFUJ) President Shehzada Zulfiqar has announced a long march if the government fails to accept their charter of demands.

He made this announcement while delivering his presidential address at a multi-stakeholder journalists’ convention on ‘Legislation, regulation and media crises under the auspices of PFUJ and Bahawalpur Union of Journalists (BhUJ) at the press club here on Monday.

Mr Zulfiqar said if the government did not accept the union’s demands, including withdrawal of the media authority bill, reinstatement of sacked workers and reversal of pay cuts, a long march would be launched by Nov 12 from Quetta and passing through Karachi, Hyderabad, Bahawalpur, Multan, Faisalabad and Lahore it would culminate in Islamabad. He warned the government of dire consequences if the Pakistan Medical Authority Bill was enforced.

PFUJ Secretary General Nasir Zaidi explained to the participants the aims and objectives of the convention, adding the union also stood against fake news and demanded the government remain fair in the struggle for healthy journalism and refrain from unnecessary restrictions on the media.

Earlier, BhuJ President Majeed Gill apprised the participants of the union’s struggle for press freedom and assured the PFUJ of their complete support in its struggle against the Pakistan Media Development Authority Ordinance.