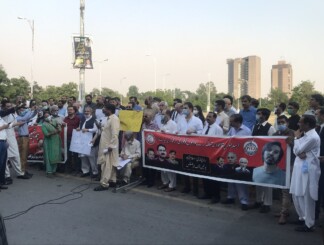 ISLAMABAD: Speakers at rallies organised by the Pakistan Federal Union of Journalists (PFUJ) in the country demanded an investigation into the attack on journalist Asad Ali Toor and immediate arrest of the attackers.

Speakers from various political parties, civil society and different walks of life recalled that Mr Toor was severely beaten up by the attackers at his house in Islamabad.

Mr Toor, who addressed a rally outside the National Press Club in Islamabad, said that allegations levelled by retired army officer Amjad Shoaib against him should be taken seriously and the state agencies should track down the men who attacked and tried to kill him.

“My family in my hometown Sargodha is being harassed and victimised,” he said. “But I will not surrender before anti-media forces and will keep on speaking the truth as all the institutions belong to the people of Pakistan,” he said.

Pakistan Muslim League-Nawaz leader Marriyum Aurangzeb warned political parties, media and civil society that a draconian law to control the media was being introduced through an ordinance for the creation of Pakistan media regulatory authority, which would be disastrous for the nation.

Frahatullah Babar of the Pakistan People’s Party urged the government and state institutions to investigate incidents of attacks on media persons as it was the responsibility of the institutions. “Blaming victims has become order of the day to divert attention from such attacks,” he said.

PFUJ President Shah­za­da Zulfiqar, while addressing a rally in Quetta, said that it was an irony that now their houses were being attacked to pressurise journalists and suppress the media. “It is the responsibility of the government to provide protection to media workers and journalists,” he said.

PFUJ Secretary General Nasir Zaidi in his speech said whether it was media regulatory authority bill or attacks on journalists, “we are at war for freedom of press and freedom of expression”. “We have won such wars in the past and we will be victorious this time too,” he said.