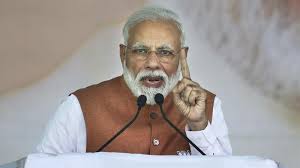 ISLAMABAD: Pakistan on Monday condemned Indian Prime Minister Narendra Modi for curbing and undermining the rights of minorities in a bid to ensure Hinduvta supremacy.

“Concerned about the brutal and indiscriminate use of force by the state on Indian Muslim students of Jamia Millia Islamia and Aligarh Muslim University, protesting against the Citizenship Amendment Bill,” tweeted Foreign Minister Shah Mahmood Qureshi while condemning the Indian government for the violent crackdown in New Delhi against the CAB.

The foreign minister tweeted at a time when reports coming in from India spoke about protests breaking out in other parts of India as well with over a hundred protestors injured, some of them seriously.

The minister’s tweets came at a time of nearly a week of protests and when the Indian economy took a turn for the worst with Moody’s saying that India’s growth has decelerated, with GDP growth falling to 4.5% in Q3 2019 from 5.0% in Q2 2019.

“The Modi government continues to curb and undermine the rights of minorities in accordance with Hindutva supremacist ideology. Illegal annexation of Kashmir, Babri Masjid, Citizenship Amendment Bill which excludes Muslims are all targeted towards subjugation of minorities,” he added.

One of the main opposition leaders, Sonia Gandhi while criticising Modi said, “A government’s job is to maintain peace and harmony, deliver governance and protect the constitution. But the BJP government has declared a war on its own people. It has become the creator of violence and divisiveness. The government has pushed the country into an abyss of hatred and made the futures of youth uncertain.” She blamed the government’s intentions which she said were to spread instability in the country, rob the youth of their rights, create an atmosphere of religious tension and serve political interests.

“The writers of this script of polarisation are no one but Prime Minister Narendra Modi and Home Minister Amit Shah,” she said

The Amnesty International India also slammed the Delhi police for its “violent” action against students at Jamia Millia Islamia in Delhi and Aligarh Muslim University (AMU) protesting against the amended Citizenship Act.

It said the allegations that the police brutally beat up and sexually harassed Jamia students must be investigated and those responsible prosecuted. There was support for students and activists in Delhi from the Tata Institute of Social Sciences in Mumbai who said that the police action cannot silence those protesting against the Citizenship Act.

“If the government thought that lathi-charge assault on students of Jamia and AMU will stop other such protests from happening then it’s a wrong assumption. From now on, if they assault students in Delhi then Mumbai will rise and if they keep us quiet, students in Kerala will protest,” said Fahad Ahmad, former general secretary TISSSU.

Protests had initially started in Assam where four people have died in police firing, dozens injured, with internet services still cut off.